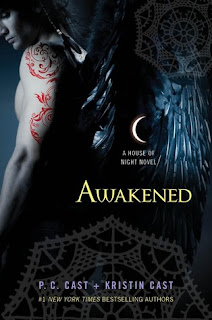 Exonerated by the Vampyre High Council and returned to her position of High Priestess at Tulsa's House of Night, Neferet has sworn vengeance on Zoey. Dominion over Kalona is only one of the weapons she plans to use against Z. But Zoey has found sanctuary on the Isle of Skye and is being groomed by Queen Sgiach to take over for her there. Being queen would be cool, wouldn't it? Why should she return to Tulsa? After losing her human consort, Heath, she will never be the same - and her relationship with her super-hot warrior, Stark, may never be the same either.
And what about Stevie Rae and Rephaim? The Raven Mocker refuses to be used against Stevie Rae, but what choice does he have when no one in the entire world, including Zoey, would be okay with their relationship? Does he betray his father or his heart?


I thought long and hard about this review. And all I could say is that I'm relieved to be through with this book. This series has weighed down on me heavily. This was the 8th book in a series that is not even over with. I used to wish that some of the series that I absolutely loved would never end, but reading this series I finally understood that there is a good reason why series come to a close. You may be wondering then, why, if I disliked this series so much why I continued on with reading it. It is simple. I have invested so much of my time into this series, that regardless of how I felt, I could not, not finish reading it.
So on with the review of this book. At first I was going to actually give this book 5 stars. Simply because of the fact that one of these books finally created some emotion within me, and I actually cried. In this book, my favorite character was killed. Poor Jack. Even Zoey's mother was murdered (both by Neferet of course). And while I am not going to necessarily complain, because I understand the need for characters to be killed (sometimes), what I have a problem with is that in all of these books, it has been the most innocent, the sweetest, or the weakest of characters that were killed. The Cast's have gone after the sweetest one's. Jack was just so sweet, and did not deserve to be killed so cruelly, and Zoey's mother had finally just gotten free of her evil husband and only wanted to connect back with her daughter. And Heath, while I saw his death coming (it was on a time clock after all), it was still in my opinion unnecessary.
What really ruined this series for me, however, was that NONE of these characters have a back bone. Zoey, for a good part of the book, hid out and let her friends do all the battling for her, because she was just TO scared or scarred. And Stevie Rae, could only admit to her friends about Rephaim after it was practically thrown in their faces and she couldn't hide it from them any more. It was the most annoying thing ever.
However, the real reason that I lowered my review of this book from 5 stars to 3 was because of the end. Because at the end, the Cast's bring back Heath, but he is put into the body of the evil servant of Neferet's. *sigh* And 'Destined' is scheduled to come out this month. Trust me when I say that I will be taking my time before I pick it up to see where this series leads us.