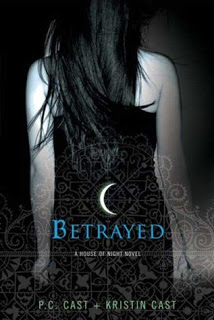 
Fledgling vampyre Zoey Redbird has managed to settle in at the House of Night finishing school. She finally feels like she belongs, even gets chosen as the Leader of the Dark Daughters. Best of all, she actually has a boyfriend... or two. Then the unthinkable happens: Human teenagers are being killed & all the evidence points to the House of Night. While danger stalks the humans from Zoey's old life, she begins to realize that the very powers that make her so unique might also threaten those she loves. Then, when she needs her new friends the most, death strikes the House of Night & she must find the courage to face a betrayal that could break her heart, her soul, and jeopardize the very fabric of her world.

To begin with, I was not happy that for about almost half of the book Erik was absent because he was away on a poem competition. And then when he did finally get back, everything went downhill from there.

I can not believe what happened to Stevie Rae, even though in a way I did see it coming. Ever since I read the back of the book when I first started to read it and the excerpt said that The House of Night is rocked by a death, I knew that one of Zoey's inner circle was going to die. For some reason, its always the sweetest characters that are targeted first. Survival of the fittest (in a way of speaking).

However, I was taken back by the development between Zoey and Loren. 3 guys. Really? When is the boyfriend count going to stop? Now don't get me wrong, I am a fan of forbidden love. Teacher/Student love, I mean please, I TOTALLY love 'The Vampire Academy' series and everybody who has read that series will understand what I mean by that. But Zoey already has a good guy. How many situations are P.C. and Kristin going to give Zoey to totally screw up being happy with ONE guy.

I don't necessarily like Heath's role in this whole book at all. I sort of counted him out from the very beginning of book one and the act that he is still an issue in book two (and even book three that I have already started to read) is kind of discerning. Let the poor 'human' find some kind of measurement of love, for which he will never be truly able to find with Zoey anymore.

The whole blood lust thing with Zoey is starting to get a little tiresome as well at this point, I mean 'I GET IT' by this point. She likes (even loves) her some blood. Move on and let us figure out something else about her. Let us see how she develops from there. Give her time to mourn the loss of her friend and see how she is going to combat the evil that we all now know Neferet to be.

But no. Stevie Rae is now one of the creepy undead vampyre creatures that Zoey first saw in book one, that has still not been fully explained. And of course, Zoey being Zoey, an the kind hearted person she is won't give up the effort to try and rescue her friend from that kind of non-life. Which I can only see spelling disaster for her.

Heath/Erik/Loren? Whom to choose? (Erik, I don't fully trust Loren and Heath can never be a smart choice for her.)

Save Stevie Rae? (She is Zoey's best friend, I must say I would try to do the same, but you have to be smart about it, but because you can't tell your best friends. It may be impossible without losing said friends).

What to do about Neferet? (Well now, that's going to be the difficult part. Guess only time will tell and reading the rest of the books).

Hopefully something is figured out soon, because I hate reading book after book that just revolves itself around the same issues without giving any kind of clear answer until the very last book in the series. It's always an answer that could have easily been seen and solved in books way before it.