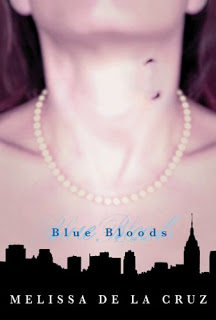 
Schuyler Van Alen has never fit in at Duchesue, her prestigious New York City private school. She prefers baggy, vintage clothes to the Prada and pearls worn by her classmates. But when she turns fiftee, Schuyler's life changes dramatically. The death of a popular schoolmate haunts her in unexpected ways. And strangest of all, Jack Force, the most popular boy in school, is showing a sudden interest in her.

Once an outcast, Schuyler is thrust into Manhattan's most exclusive social circle. Its members are the most powerful, the wealthy, and - as Schuyler soon discovers - the unhuman. They are Blue Bloods, an ancient group of vampires, and for centuries they've been invincible. Now something is preying on this elite group, and Schuyler wants to find out the truth. But is she the most vulnerable of them all?

Let me first start off by saying that, this book was nothing like I was expecting. In a good way though. I genuinely liked this book. It was a very easy read and a very easy world to engulf myself in. It was a different take on Vampire's which was a nice thing as well.

I don't know if I necessarily liked the romance between Schuyler and Jack, it seemed extremely artificial rally and didn't really form a base for any more romance to continue on with them, but I look forward to seeing what happens with them. I like the character of Oliver, he is a sweetheart and obviously adores Schuyler very much.