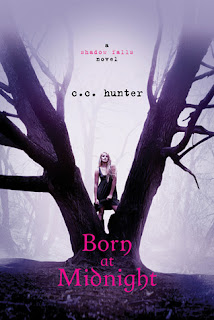 One night Kylie Galen finds herself at the wrong party, with the wrong people, and it changes her life forever. Her mother ships her off to Shadow Falls - a camp for troubled teens - and within hours of arriving, it becomes painfully clear that her fellow campers aren't just "troubled." Here at Shadow Falls, vampires, werewolves, shapeshifters, witches, and fairies train side by side, learning to harness their powers, control their magic, and live in the normal world.
Kylie's never felt normal, but surely she doesn't belong here with a bunch of paranormal freaks, either. Or does she? They insist Kylie is one of them and that she was brought here for a reason. As if life wasn't complicated enough, enter Derek and Lucas. Derek's a half Fae who's determined to be her boyfriend, and Lucas is a smokin' hot werewolf with whom Kylie shares a secret past. Derek and Lucas couldn't be more different, but they both have a powerful hold on her heart.
Even though Kylie feels deeply uncertain about everything, one thing is becoming painfully clear: Shadow Falls is exactly where she belongs....


I wanted to read this book since the day I first saw it at my local Barnes & Noble. However, I had quite a few other series that I was currently in the process of reading, so I held off on getting it. I finally gave in and bought it at random one night and started reading it later that same day. To say that I was engrossed in it from page one would be an understatement. I absolutely ADORED this book. The characters are some of the most developed characters that I have run across in a YA fantasy novel in quit awhile. Not only are the main character's greatly developed, the supporting characters are as well, and I found myself loving every single character in this book, even the ones that frustrated me. I find myself IMPATIENT for 'Awake at Dawn' to come out in October so that this story can be continued and I can go back to Shadow Falls Camp and see how these characters continue to interact and grow.
I must say at the beginning I was Team Derek but by the end of the book im totally Team Lucas. I can clearly see that Derek is a sweet guy and obviously really likes Kylie, however for the life of me I can only see them as REALLY good friends. In the end I cant see them as anything more then that. I just think in the end that while Lucas may not be the safest or easiest choice for Kylie that that is who truly pushes her buttons and brings out TRUE and DEEP emotion within her.
And besides the great character development, something else that I found amazing about this book is that while I have read a LOT of YA fantasy (vampire, werewolf, etc.) books. Their plots start to merge together and be similar to where they get predictable and boring. However, I found this plot (while not COMPLETELY original) a breathe of fresh air. It took a well know idea and twisted it around and made it different and new and enjoyable all over again. It made me want to put away my 'break' from reading and to start reading non-stop again.
I LOVE all these characters. I found myself connecting with Kylie and while at first I found her quit annoying, it ended up loving her by the end of the book. I adored Della and Miranda from the beginning. And their spats that they constantly found themselves in, where absolutely hilarious. I don't think that C.c. Hunter could have created a better friendship between these three characters. Derek was a nice characters and was cute right from the beginning. I sort of didn't like him when it looked like he had put aside his feelings for Kylie so easily but later on he grew on me again. Lucas was a harder character to really like at first, but by the end I couldn't wait to find out more about him. Helen was a sweet character to learn about and I hope that her role in 'Awake at Dawn' grows and she is put more up front with all the others and steps out of the limelight. Holiday I found to be the best 'adult' figure in a book that I've read in quit awhile. Her and Kylie's closeness is really endearing and quit believable.
Overall I absolutely adored this book and don't regret that night I decided to randomly get it. It was definitely the right choice. This is a series that I can definitely see myself at rating as 5-stars all around. I see it as being one of my all time favorites. Let's keep our fingers crossed for 'Awake at Dawn'. October couldn't get here any sooner.