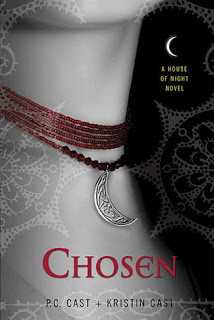 
Bloodlust and dark forces are at work at the House of Night, and fledgling vampyre Zoey Redbird's adventures at the school take a mysterious turn. And, oddly enough, sworn enemies are also turning into friends. Zoey's mettle will be tested like never before. Her best friend, Stevie Rae, is undead and struggling to maintain a grip on her humanity. Zoey doesn't have a clue how to help her, but she does know that anything she and Stevie Rae discover must be kept secret from everyone else at the House of Night, where trust has become a rare commodity. Speaking of rare, Zoey finds herself in the very rare position of having three boyfriends, a situation with the potential to spell social disaster. Then vampyres start turning up dead. Really dead. But as Zoey and her friends find out, things are not always what they seem....

No, No, No, No, No, No, NO!!!! What happened to this series? I mean seriously, dude. The first book was good, I liked it. Zoey was a good main character and had a lot of funny dialogue. All the other characters were strong and funny and supported the main character. But as the series went on, it just started to suck. I can over look grammatical errors. That happens to everyone, so no one is perfect on that front. But what the HELL did the Cast's do to Zoey through this series.

I can understand her being a normal teenager despite the fact that she is turning into a very powerful High Priestess Vampyre. But what the f***? 3 guys at the same time? One of them being a professor? Now I can over look the professor part, because I read and LOVED 'The Vampire Academy' series. But come on, it was obvious from a mile away that Loren Blake was not all that he portrayed himself to be. I knew from book 2 that he wasn't a character to be trusted. I didn't know exactly what his agenda was, but I knew he had one. I knew from day one, that the whole Heath issue wasn't going to benefit Zoey one bit at all. The best guy for her, since the beginning of the book was Erik, and he's the one that she (in my opinion) as treated the worst.

I mean I'm sorry that Heath has to go through all that pain, but the only thing that was beneficial between Zoey and Loren screwing and imprinting themselves was that Heath was finally free. But of course, I can only imagine that he will some how pop up again the future books to try and win Zoey back. The Cast's need to leave Heath alone and let that character just fade away so that he can find a measure of happiness for himself. Because with him just being a simple human, and all the horrors I can only imagine are going to be coming, a simple human isn't going to do nothing but somehow get himself killed trying to protect the one he loves, namely Zoey.

But besides the 3 boyfriends issue and the fact that her friends were lame enough to her birthmas presents. Come on I mean, even if you have only known a person for 2 months, its pretty obvious that mashing their birthday and Christmas is not a wise idea. However, screw all that, I can over look all that s***. It's Zoey that I have an issue with.

I don't think in all the 17+ years that I have been a steady reader that I have ever hated a main character. That is until now. I HATE Zoey's characters. The Cast's have completely crewed up this main character. For one, Zoey has absolutely NO back bone. You can not create a main character has no flipping back bone. I mean, seriously? Besides the fact that in the first book she was criticizing Aphrodite for being a slut and nasty, when what has she done, but gone and gotten herself 3 boyfriends and slept with one of them, who happens to be a professor at her school. WTF? Aphrodite is an angel in comparison to that.

I was sooooooo mad by the end of this boo, I just wanted to scream. Talk about wasting my money. Like WTF! Gah. I have to admit I was so mad I googled the rest of this series and already cheated and read an overview of what happens in the other books and let me tell you it gets pretty silly. At least in my opinion. I mean I'm still going to read the rest of the series because I never stop in the middle of a series because being me I always have to get to the end and see how everything ends. But come on Cast's you need to make this series better and develop your characters. Its like you don't even truly know who they are and your the writers.

Another thing, I like things to be developed from book one. So, when you bring in a love interest for your main character you need to keep that same love interest not keep bringing in a different guy every book. Stark seems like an okay guy and everything, but you should not have made him Zoey's true love. It should have remained Erik and them figure out their issues in the end. Don't bring in a new guy in book 3 of a series and be like, this is who she loves. That's bs in my opinion. I support Zoey and Erik the whole way. Stark should of gotten to be with one of the other female characters you had created.

*fingers crossed* Here's to hoping the next book in the series gets better.