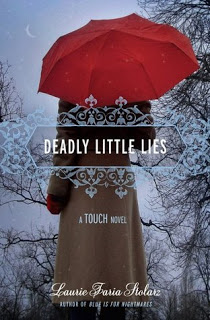 
Last fall Camelia fell for Ben, the mysterious new boy at school with a very mysterious gift - psychometry, the ability to sese the future through touch. But just as their romance began to heat up, Ben left town. Brokenhearted, Camelia has spent the last few months researching psychometry, and experiencing her own brushes with premonition.

Even once Ben returns, things feel severed between them. Then, when a series of eerie notes echoes the threats of last semester - and Ben keeps his distance - Camelia makes the painful decision to move on.

But when Camelia and Adam, her hot new coworker, start dating, a chilling sequence of events upturns secrets from Ben's past - and Adam's. Someone is lying, and it's up to Camelia to figure out who - before it's too late.

After Ben left at the end of 'Deadly Little Secret' Camelia is heartbroken and doesn't know what to do with herself. It is at this point that she also discovers that she herself has inherited psychometric powers. While she sculpts her clay, her works of art turn into images of the future. Starting off with a sculpture of Ben's scar followed by his eye, which are only a few of the things that she sculpts in this book and that turn out to be warnings of things to come.

This book takes place four months after 'Deadly Little Secret'. School has just started again after break and Camelia, Kimmie and Wes are getting back onto their regular schedule. Camelia is being closely watched by her parents after the incident with Matt and Ben saved her. Kimmie's situation at home is getting even worse and her parent are fighting even more. Wes has hired himself a college girl to posse as his girlfriend to try and get his Father off his back about his 'non-to-stellar' manly skills. Debbie (the girl that got hit by the car and was in a coma in 'Deadly Little Secret') still blames Ben for her accident even though he was proven guiltless.

Ben comes back, back after Camelia's initial excitement to see him, he pushes her away and forcefully (and quit meanly if you ask me) tells her that he does not want to work on their relationship and feels that it would be best if they just remained friends. However, this does not quit work out the first time and a few of these senses go on where he tries to tell her that they need to remain 'just friends'. After a cute and sweet scene where they talk and Ben ends up spending the night at her house, cuddling her all night while she sleeps, it finally sticks, and a distance starts to come between them.

This distance is introduced as Adam, Camelia's new co-worker at Knead. At a rough first meeting between Camelia and Adam, a slow friendship is born between them. And as Camelia tries to give Ben the distance and space that he has asked of her, Camelia in a way turns to Adam. In Camelia's heart, even though she is still obviously in love with Ben, she sees Adam as a good friend, and it slowly turns into more as Adam asks her out on a date. A few dates and one chaste kiss later, Camelia and Adam are together in a manner of speaking and you are left with one jealous Ben. A jealous Ben? Yes, even though he so rudely asks Camelia for the space and insists that they cannot be together, he is none the less jealous to see her move on.

However, Camelia starts to get weird mail sent to her at home again. First picture of Julie (Ben's ex-girlfriend who ended up dying on that fateful hike) and a picture of her shrine onto the mountain are just a few of the things that she gets from her mysterious new stalker. Not to be out done by Matt, Camelia's new stalker also leaves her deadly messages on her bulkhead as well as calls her to make sure she got the message. 'You are Dead'.

Near the end of the book. You find out that Ben and Adam have a past together. Adam was originally using Camelia only to get back at Ben. Once this truth comes out, Camelia immediately excludes Adam from her life, even though he confesses and tells her the truth and that in the end he did have genuine feelings for her and ended up falling for her.

Camelia's new stalker makes her move after her parents leave for Detroit to talk with 'crazy' Aunt Alexia and her psychiatrist. Once again, Ben ends up saving her life. After that, Ben and Camelia work out their relationship and they finally end up together in the end. After the two books of denial 'in a way' their relationship finally comes out completely public. Which in a way is a heartbreak to Camelia's father, who really liked Adam. [You will see]