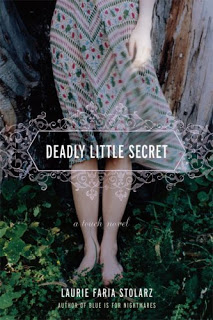 SOME SECRETS
SHOULDN'T BE KEPT....

Until three months ago, sixteen-year-old Camelia's life had been fairly ordinary. Then a mysterious boy named Ben started Junior Year at her school and changed everything.

Rumored to be somehow responsible for his ex-girlfriend's accidental death. Ben is immediately ostracized by everyone on campus. Except for Camelia. Despite the rumors, she's inexplicably drawn to him... and to his touch. But soon, Camelia is receiving eerie phone calls and strange packages with threatening notes. Ben insists she's in danger, and that he wants to help - but can he be trusted? She knows he's hiding something... but he's not the only one with a secret.

A girl, in this case Camelia, falls in love with the mysterious young boy, in this case Ben. Ben is obviously hiding a secret and has already been ostracized by the entire school because of his past and being accused of his girlfriend's death. Ben in the beginning of the book saves Camelia from being run down by.... yes, a car. (sound similar yet?).

Camelia and Ben slowly get closer, even though Ben's swearing they need to stay away from each other because, she is not safe around him. It is later found out that Ben has psychometry, the ability to sense the past, present, and future through touch. He only decides to be around Camelia after he feels she is in danger, after he accidentally touches her, in their only class together... what else, chemistry (similar yet again?).

Okay, so overall, 'Deadly Little Secret' was a good read. A fast read, but a good one none the less. I love the Twilight series, so even though there are a lot of parts in this book that remind me of it, I'm not going to fault the book for there. For while, there are a lot of parts that remind me of it, there is enough differences in some of the things that happen in the book, to still keep it originally and completely its own. Not just a copy of an already written story.

At the end of 'Deadly Little Secrets' Ben leaves. Something that definitely left me sad, because well, I had come to really like Ben's character. (LOL. Yes, I am totally Team Edward and in this case Team Ben). I would recommend this book to anyone that wants a quick, nice book to read. That does not have a lot of gore, death and dark sense's that a lot of fantasy YA books oft time's have in them.

P.S. The only thing I will sat to figuring out who it is stalking Camelia is this; Laurie Faria Stolarz reveals the person practically at the very beginning of the book. If you pay enough attention you can figure it out. Good luck and enjoy reading.