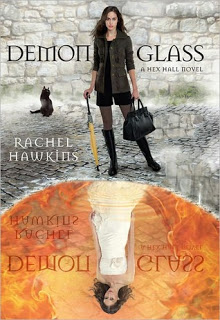 
Sophie Mercer thought she was a witch. That was the whole reason she was sent to Hex Hall, a reform school for delinquent Prodigium (a.k.a. witches, shapeshifter, and fairies). But then she discovered the family secret, and the fact that her hot crush, Archer Cross, is an agent for The Eye, a group bent on wiping Prodigiy off the face of the Earth.

Turns out, Sophie's a demon, one of only two in the world - the other being her father. What's worse, she has powers that threaten the lives of everyone she loves. Which is precisely why Sophie decides she must go to London for the Removal, a dangerous procedure that will either destroy her powers for good - or kill her.

But once Sophie arrives, she makes a shocking discovery. Her new housemates? They're demons too. Meaning, someone is raising demons in secret, with creepy plans to use their powers, and probably not for good. Meanwhile, The Eye is set on hunting Sophie down, an they're using Archer to do it. But it's not like she has feelings for him anymore. Does she?

'Demonglass', the sequel to 'Hex Hall' definitely lived up to the promise that 'Hex Hall' had started.

In 'Demonglass', Sophie along with her Father, Jenna and Cal go to England over the Summer. The meaning of the trip, is for Sophie to get to understand what it truly means to be a demon and to do some much needed family bonding with her Father who she finally met for the first time. It is also at this point, right before she leaves for England that she finds out that she is in fact betrothed to Cal. That was somethin even I didn't see coming. But, something that did make for an interesting turn. I did predict at the end of 'Hex Hall' that Cal would have a bigger role in 'Demonglass' then he had had in 'Hex Hall' and yes, indeed he did. We got to know his character a lot more and I came to like Cal's character the most in this whole series. However, I simply wish there would have been even more of Cal's character then there was. The ending of the book only promises a lot more of his character, however, so that appeases me, for now.

Sophie and James (her Father) have a lot of getting to know each other time in this book, which strengthens their bond a lot. It was nice to get a glimpse of this bonding time. James has fortified his role as a major character in this series and hopefully even more in this coming book. Which by the end of 'Demonglass' we can only hope for after his powers of a demon are stripped from him by the Council after he relinquishes his powers over to Lara.

It is quit shocking when it is found out that the other demons (like Daisy and Nick / I absolutely dislike these characters) are being raised on a forbidden part of land on 'Hex Hall'. That Lara and Anastasia are the one's raising the demons, even with the help of the other Council members, all under the nose of James, the Council leader. I liked the character of Anastasia up until this point. I felt like a betrayal of her and the trust put into her as a character. I felt the pain I'm sure that Sophie felt, even the betrayal.

If any of you are wondering, yes, Archer is a big part of this book as well. Even though he is a part of The Eye. His entrance into 'Demonglass' is when he rescues Sophie from being captured and goes on to plan a secret meeting with her where they can talk. Sophie doesn't end up going to this meeting.

I love that Cal finally man's up and lays one on her by the end of the book, even if it is during imminent danger and he rushes away afterwards to try and help her father. Though of course, this book ends in a cliffhanger. Something I feel Ms. Hawkins has mastered.

Owwwww.... And I forgot to mention, Jenna is missing.

Now I must wait a year to find out what is going on. It's going to be a long year.