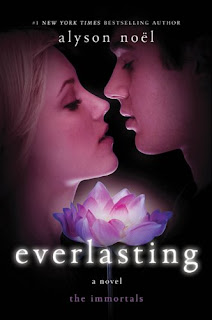 Author: Alyson Noel
Publisher: St. Martin's Griffin
Release Date: June 7, 2011
Pages: 320
Buy It: Amazon / B&N
Their darkest enemies now defeated. Damen and Ever are free to embark upon their final quest - to free Damen from the poison lingering in his body. If they can just find the antidote, they'll finally be able to feel each other's touch - and experience the passionate night they've been longing for. But their fight to be together will lead them into the most formidable terrain yet... into the dark heart of Summerland.
Here in a land of scorched earth and endless rain, Ever and Damen will discover their relationship's hidden origins, expose a secret history they never imagined... and come face-to-face with the true reason fate keeps tearing them apart. Only then, when the final mystery is unraveled and the last secret revealed, will Ever and Damen's future hinge on the one ultimate decision that will put everything at stake - even eternity.
Review:


Just WOW! How bored was I by this book and it was the ending to the whole series. While non of the books in this series really wowed me, I was still disappointed by this book and the ending. This entire book left me with really only one impression, that both Ever and Damen were rushing for only one thing; not love but SEX! Yes, you heard me right, this whole book and the past several books, were about them trying to find a cure so they could be together the way they wanted to be, and that saying was said over and over and over and over and over again during this entire book. It irritated the heck out of me. And I couldn't grasp their love at all, to me they didn't love each other, and their love had been going on for hundreds of year's to just keep repeating itself because Ever kept getting herself killed by Damen's jealous ex. GAH!!!!! Love does not equal Sex and Sex does not equal Love. And the whole thing with the Tree of Life and the fruit that would make them mortal once more. It just seemed so forced. Like Ms. Noel only threw that in the give the book some extra pages.
Ever never had any trouble with being an immortal until this book, when all of a sudden it was like being an immortal was gravely wrong. I'm truly thankful I didn't spend the $17 dollars buying this book for myself. Thankfully a friend gave it to me, but then again I guess I can understand now why she was so willing to let me have it.
Over all, while everything wrapped itself up, I just didn't like it. This book taught me how to HATE Damen as a character. He was nothing but selfish and thought about nothing but himself for someone that was supposed to love Ever so much and for 600+ years. He wouldn't help Ever with anything in this book and it was irritating the HELL out of me. By this book I was truly wishing Ever would of ended up with Jude, he had a lot more to offer her in my opinion. And the fact that Jude ended up with Honor at the end of this book, gah! I hated that even more. I had this overwhelming urge to punch Honor and a lot of other characters in this book. Through the whole series Honor and Stacia were nothing but evil to Ever and then Ever is gone for 5 months (or something like that) in Summerland and when she gets back Honor and Stacia are hanging out with all her friends and all of a sudden they are good and friends with everything, that was just bullshit.
My final say on this book, Ever should of ended up with Jude and there wasn't enough of Miles in it.