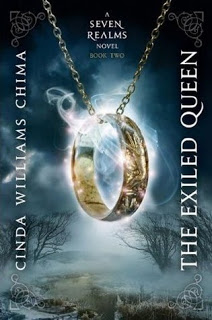 
Haunted by the loss of his mother and sister. Han Alister journey's south to begin his schooling at Mystwerk House in Oden's Ford. But leaving the Fells doesn't mean he's left danger far behind. Han is haunted very step of the way by the Bayars, a powerful wizarding family set on reclaiming the amulet Han stole from them. And Mystwerk House has dangers of its own. There, Han meets Crow, a mysterious wizard who agrees to tutor Han in the darker parts of sorcery - but the bargain they make is one Han may regret.

Meanwhile, Princess Raisa ana'Marianna runs from a forced marriage in the Fells, accompanied by her friend Amon and his triple of cadets. Now the safest place for Raisa is Wein House, the military academy at Oden's Ford. If Raisa can pass as a regular student, Wein House will offer both sanctuary and the education she needs to succed as the next Gray Wolf Queen.

Everything changes when Han's and Raisa's paths cross, in this epic tale of uncertain friendships, cutthroat politics, and the irresistible power of attraction.

I was really excited for 'The Exiled Queen', after loving 'The Demon King' so much. I have to sat that it did a great job at entertaining me. It wasn't until the very last few chapters that I started to get bored with the book. Don't get me wrong, I am still greatly looking forward to reading 'The Gray Wolf Throne' when it comes out in August. However, at the end of 'The Exiled Queen', I just found myself disinterested in what was happening with the characters. I still love Han and Raisa, but I find it a little irritating at this point that we are going into the third book in a four book series and the two main characters have barely (finally) meet each other. That fact is getting a little repetitive and the fact that I was finished with over half of the book before Han and Raisa even met each other. It get's a little old. It does set up great character development for both Han and Raisa and all the other characters, but call me stingy, I like my main characters to be together for the majority of the book, especially since Han and Raisa are really good together (adorable even). For the most part I loved 'The Exiled Queen', but I had to give it only 4 out of 5 stars because at the end of the book, it just didn't do anything for me anymore. Hopefully, 'The Gray Wolf Throne' will save the series for me.