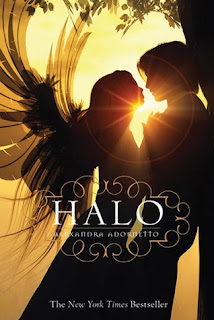 Author: Alexandra Adornetto
Publisher: Feiwel & Friends
Release Date: August 31, 2010
Pages: 484
Buy It: Amazon / B&N
Heaven Sent
Three angels are sent by Heaven to bring good to a world falling under the influence of darkness: Gabriel, the warrior; Ivy, the healer; and Bethany, the youngest and most human. They work hard to conceal their luminous glow, their superhuman powers, and their wings. Then Bethany meets Xavier Woods, and the two are unable to resist their attraction to each other. But the angels' mission is urgent, and dark forces are threatening. Will love ruin Bethany or save her?
Review:


This was a hard book to really get into at first. The writing especially annoyed me in the beginning. There were such big words (completed words) thrown in at places, that they just didn't need to be. Don't get me wrong, I understand the use of those words and they didn't intimidate me or anything like that. It just really irritated me because, it degraded the book in my eyes. It made it feel a little cheesy, as if Ms. Adornetto went through a Thesaurus to find more complicated words for smaller words that would have been perfectly okay (ex. sad became melancholy, surprised became flabbergasted and so on and so forth). The beginning of this book read as a first draft and as if it was a little kid just writing for the fun of it and wasn't actually trying to show us a story of undying and star crossed impossible love. It got better about 300 or so pages in, but to really get through this book I had to buckle down and really force myself to find the beauty that was waiting.
As for the characters, that's a whole other story. They all just seemed the same. They didn't really seem all that defined to me. Even after finishing the book, I can't really tell one character from the other. The only two that have a definite characterization are Bethany and Jake and that is simply because one is pure goodness and the other is pure evil. But then again, how hard is it to make a person seem like an angel or like the devil? I like Xavier simply because he loves Bethany so much and you can see that. You could fill his pain when he thought she had betrayed him, but it also just felt so underwhelming. I mean really, you thought an angel was going to betray you. AN ANGEL!!!! Like come on. I understand that Bethany is like an Angel of Mercy and her power in the end is revealed to be 'Love'. (ow shocker there), but he didn't even give her a chance to speak, but I guess that was the hurt speaking. The weirdest part in this book for me was when Gabriel went to confront Xavier and bring him back to Bethany so Xavier could see what his anger had done to him, it wasn't that but what happened afterward when Gabriel and Ivy left to give them some privacy. They made up, but then they stripped down to see each other in the nude and just laid down together cuddling on her bed completely naked because they felt closer that way. Idk, I guess that just felt really awkward for me.
What really got me about this book, was that NOTHING HAPPENED! It just felt dead. It took like 300 pages for Ms. Adornetto before she even introduced us to a character that finally shook things up for the main characters. But this book was just so bland, it has no seasoning to give it flavor. I couldn't figure out what the point of this book was. I usually take something with me from every book I read, but I didn't really take anything with me. The character's didn't leave any permanent impression on me, the story did wow me and by the end I was just falling asleep and bored of the story.
Overall, it was just okay. I will definitely read the next book in this series, but I won't go running out to get it. Ill wait until it comes out in paperback and save myself a few dollars.