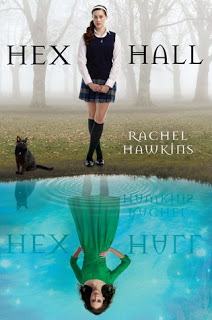 
On her 12th birthday, Sophie Mercer discovered that she was a witch. Three bumpy years later, after a prom-night spell gone horribly wrong, she's exiled to Hex Hall, an isolated reform school for wayward Prodigium, a.k.a. witches, faeiries, and shapeshifters.

By the end of her first day, Sophie has quite a scorecard: three powerful enemies who look like supermodels, a futile crush on a gorgeous warlock, a creepy tagalong ghost, and a new roommate who happens to be the most hated person and only vampire on campus. Then when a mysterious predator begins attacking students, and Sophie's only friend is the number-one suspect, a horrifying plot begins to surface. Soon, Sophie is preparing for the biggest threat of all: an ancient secret society determined to destroy all Prodigium, especially her.

This was a genuinely good book to read. It was easy to get into the world that Ms. Hawkins was painting for us. I was finishing with the book before I even realized I was coming to the end. I was so sucked into this world, that I was even finding myself picking up the book to read during the two-minute intervals of a game loading for me and my friends playing xbox. I started this book early yesterday morning and have already completed it. Which really isn't surprising when it comes to me, but it shows how much I enjoyed this book.

I'm not going to go all blubbery and say that this was the greatest book in the world. Yes, it was good. Don't get me wrong, and yes, I did read it fast. But of course, like almost all books there were parts that I didn't necessarily like. I must say that Ms. Hawkins was able to create a character that I honestly do not like. Even after her tragic death. Elodie. She was simply a snobby b**** and made parts of the book irritating to the point that I had to put it down and take a break. I must say that if it were not for her character, I may have finished this book even faster. But then again, every book needs its antagonist. And that was the only purpose (in my opinion) that Elodie served.

I think one of the things that I most enjoyed about this book was that Ms. Hawkins was able to incorporate ideas into the story that even I was unable to see coming from a mile away. I did have a feeling that Archer was keeping some kind of secret. But the only reason I had this feeling about him was because of the time that it was mentioned that after Holly was killed he had an 'absense' from the school for an extended period of time and when Sophie asked him about it, he seemed kind of evasive. So yes, I will admit that when it was revealed that he was somehow involved with 'The Eye' was not all that surprised but I was greatly saddened because I was hoping that it was not the secret he was keeping. For I really liked the character of Archer. He was one of the ones that made the book funny to read. To see the development between him and Sophie. But then it makes me think that at the beginning of the book, how he 'guessed' that Sophie's name ended with an ie before he even knew who she was. It makes me think that he knew her before she even got there and that he had been out where to see her on purpose. Sort of like he was assigned to her or something. Mm. Makes me wonder. I guess only the next books to come in this series will tell.

I do like the character of Sophie. She was a character that has her faults, acts her age and does not always make the wisest of decisions. But that is part of the beauty. Because of these facts, she is a character that one can see grow from book one of a series to the end of it. That is something that I greatly look forward to in this series. To see how Sophie grows not only as a person but as a witch... let me correct myself... as a demon.

I also really like Jenna. She is a great supporting character for Sophie. And they have an obvious friendship with one another. It is something that gives the book a lighter feel even through all of the killings or attempted killings going on at the school.

Normally I would go onto revel more about this book. But... I honestly don't want to. I want people to read it and enjoy it themselves without any forewarning on what is going to happen at the end. Because trust me there is even a surprise at the end that I didn't see coming.

P.S. Even though we got a glimpse of him. I do have a feeling that Cal will have a bigger role in the next books to come. That much hunky, yumminess could never be put into a simple supporting character role. I have a definite feeling that there are a lot more surprise's awaiting us in 'Demonglass' and that the next books to come in the series. I am a definite fan of this series.