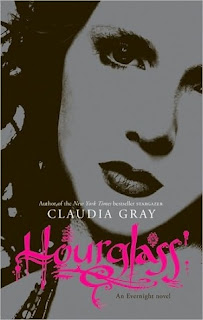 
After escaping from Evernight, the vampire boarding school where they met, Bianca and Lucas seek refuge with Black Cross, an elite group of vampire hunters. Bianca must hide her supernatural heritage or risk certain death at its hands. But when Black Cross captures her friend - the vampire Balthazar - all her secrets threaten to come out.

Soon, Bianca and Lucas are on the run, pursued not only by Black Cross, but by the powerful vampires of Evernight. Yet no matter how far they run, Bianca can't escape her destiny. Bianca and Lucas have always believed their love could survive anything - but can it survive what's to come?


[Sigh!] I just really don't enjoy this series that much. It just seems so wishy washy to me and I can't find myself enamoured within it's pages. Don't get me wrong, I love [and I mean love] most of the characters, they have a lot of great depth to them and are enjoyable to be around. It's just the storyline and plot itself that I find myself dissatisfied with. I just don't like how Ms. Gray has created a plot around Vampires and Wraiths, it just doesn't fit in my mind right, [just like a know a lot of people hate Ms. Meyer for making vampires sparkle (which I can actually find more realistic then the whole vampire/wraith thingy)].
I mean, a vampire can't have a child without the help of a wraith, because the vampire provides the both but the wraith provides the spirit (or soul) or something. I don't know, it just doesn't click in my head right. And by the way that Ms. Gray described Bianca (and what she was going through) at the end of the book, it doesn't seem like wraith's themselves are all that soulful.
From all the positive review's I had read about this series I was expecting SO MUCH more then what I got. And by the end of this book, I was just felt sooooo bad for Bianca and Lucas and couldn't ever see them finding any kind of happiness, not even in the next book to come. I mean 'WTF!' both (BOTH) main characters were killed at the end of this book and effectively became enemies of one another. Bianca died and became a wraith because she wouldn't kill someone else and become a full vampire and at the very ending, Lucas was drained dry by a vampire and will effectively become the very thing he despises, but was dating (a vampire). LIKE WTF!!!! It's just to much for me. WHY WHY WHY!!!! Why are you destroying these poor people's life's Ms. Gray? Why give them a measure of happiness for a tiny while, and then totally shred their life's to pieces (and drag their friends life's through hell as well).
I just wanted to cry over this whole series, because none of these characters can find any happiness.