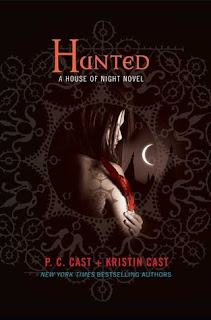 Author: P.C. & Kristin Cast
Publisher: St. Martin's Griffin
Release Date: September 3, 2009
Pages: 321
Buy It: Amazon / B&N
WHAT IF THE HOTTEST GUY IN THE WORLD WAS HIDING A NAMELESS EVIL, AND ALL HE WANTED WAS YOU?
Zoey and her gang must discover a way to deal with an unexpected danger that might bring them all down. Neferet guards her powerful new consort, Kalona, who looks gorgeous and has the House of Night under his spell. A past life holds the key to breaking his rapidly spreading power, but what if it dhows Zoey truths she can't face? Meanwhile, the red fledglings have cleaned up well, but are they really as friendly as they seem? on the boyfriend front, Zoey has a chance to fix things with her super-hot ex, Erik, but she can't stop thinking about Stark, the archer who died in her arms, and she is driven to save him from Neferet's sinister influence. Will anyone believe the power evil has to hide among us?
Review:


This one actually wasn't that bad based on the other books in the series. The House of Night series has really frustrated me from like book two. First off, P.C. & Kristin Cast have the tendency to reiterate everything that happened from the previous book through the first half of the next book that it gets really old and reintroduces us to characters that we have already known from the beginning of the series. And the simple fact that they keep telling us stuff that we already know. Its just irritating. That's why the only way that I can get through this series is if I read one book, then go to a different book and read another book in the series after that.
Besides this the book was okay. Do I remember everything that happened in this book. Not really, which is pretty sad considering I only read it a couple of days ago. Ow and let's just say that the fact that Erik and Zoey got back together was rather stupid considering it was obvious that Zoey had already fallen for Stark. And the fact that the Cast's brought back Heath is annoying. I can already see him getting killed and I find it rather sad that the Cast's are so willing to just through this character under the bus. Eh, but any ways. I guess we will see where this series takes us.