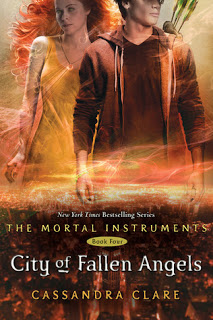 
The Mortal War is over, and Clary Fray is back home in New York, excited about all the possibilities before her. She's training to become a Shadowhunter and to use her unique power. Her mother is getting married to the love of her life. Downworlders and Shadowhunters are at peace at last. And - most important of all - Clary can call Jace her boyfriend.

But nothing comes without a price.

Someone is murdering the Shadowhunters who used to be in Valentine's Circle, provoking tensions between Downworlders and Shadowhhunters that could lead to a second bloody war. Clary's best friend, Simon, can't help her. His mother just found out that he's a vampire and now he's homeless. Everywhere he turns, someone wants him on their side - along with the power of the curse that's wrecking his life. And they're willing to do anything to get what they want. At the same time he's dating two beautiful, dangerous girls - neither of whom knows about the other.

When Jace begins to pull away from Clary without explaining why, she is forced to delve into the heart of the mystery who's solution reveals her worst nightmare. She herself has set in motion a terrible chain of events that could lead her to losing everything she loves. Even Jace.

I was excited to read this book. I had loved the last 3 in the series and fully expected to love this one as well.

However, it simply was not meant to be. From about the first 3 chapters in I realized I just couldn't get back into this world like I had the last 3 books. I still love Clary and Jace. I think that they are wonderful characters and they are an amazing couple who obviously love each other very much. But the simple fact that yet again their love is in extreme danger, just irritates me to the extreme. I understand that for the most part Clary and Jace are the main characters and thus they are the one's that are attacked, but after 3 books I was simply hoping that they would finally be able to be happy together.

I liked the introduction of Jordan, I think he was a great character to add to the series and the make up of him and Maia was really sweet as well and I hope that, that relationship goes good as well.

I think Isabelle and Simon are good together and will eventually make each other happy as well.

However, besides Clary and Jace, I have to say Magnus and Alec are the cutest couple together EVER. They are just adorable together.

The way Cassandra Clare went back into this world just seemed to dark. I did not feel completely comfortable emerging myself into the world has was recreating. There were parts where I started to like the book, around the middle when Jordan was revealed however every other part I found myself forcing myself to read the book so I could move onto the other series that I really wanted to get to.

I am interested in seeing how Camille and Will, will eventually fit into this story. However, when the fifth book is released next year. I don't see myself running out to get it and read it right away. It will just be a book that I will have to eventually get to.

Not to mention I absolutely hated the ending of this book. Sebastian should have been left well enough alone and dead.

This books is a great addition to the series. Though I didn't like the end, I think that since there are movies being made it was an end that would accomodate a movie cliff hanger.

@Espana: I must say that I am one a part of the group that believes the series should of ended with 'City of Glass'. It was a great ending to the series and I was happy the way that it was left off. I understand and fully except that people are extremely excited about the addition of the 3 books and I was at first as well, until this book ruined the craze for me. I just am not excited for the next to books. If you loved them, that is wonderful and I am glad that you did. And I know that there are movies being made, but now with 6 books (eventually) in the series, those movies are going to take FOREVER. Welcome to a new Harry Potter.