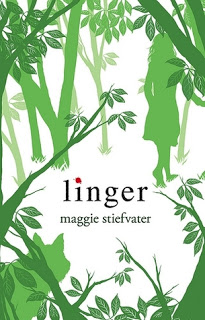 the longing.
Once Grace and Sam have found each other, they know they must fight to stay together. For Sam, this means a reckoning with his werewolf past. For Grace, it means facing a future that is less and less certain.

the loss.
Into their world comes a new wolf named Cole, whose past is full of hurt and danger. He is wrestling with his own demons, embracing the life of a wolf while denying the ties of being human.

the linger.
For Grace, Sam, and Cole, life is a constant between two forces - wolf and human - with love baring its two sides as well. It is harrowing and euphoric, freeing and entrapping, enticing and alarming. As their world falls apart, love is what lingers. But will it be enough?

Okay. My early prediction that this book was going to irritate me, didn't fell me. Yes, this book did in fact irritate me. But in the end, I can't say how much I ended up THOROUGHLY enjoyed this book.

In 'Shiver', we are introduced to Sam and Grace and see the road that their budding love takes and the path that it lead them on and the friends that they make along the way as well as still keeping up the relationships that had prior to the book. 'Shiver' was a sweet story of love and romance and what you are willing to sacrifice and how hard you are willing to fight for that love. 'Linger' takes this love to a whole nother realm.

We are introduced to Cole, one of the new werewolves that Beck makes to watch out for the pack before he realizes that Sam is going to be 'cured'. He is a sad faced, rock star (in his prior life) trying to out run the demons of his life. He first meets Isabel, who defends him in quit a unique fashion I would say, but just screams Isabel style. They instantly form a bond that is only strengthened throughout the book. For they are both damaged goods, trying to run away from their demons and unwilling to face the harsh realities of life, at least not yet. I find the connection between Isabel and Cole very enduring and it is this very bond that makes me care or them as characters. Because let me tell you I didn't really care for Isabel as a character during 'Shiver'. However, in 'Linger', Isabel definitely takes a step in the right direction and she most definitely improves as a person in general. While she would never EVER emit it, she has grown a soft spot for both Sam and Grace and you can finally see it.

Sam I think steps up more as a main character. In 'Shiver', Grace was the dominating force during most of the book, but you did get glimpses into how the story was developing through Sam's eyes. However, in 'Linger', Grace takes a step back as the main character and Sam steps forward. Cole even seems to have a bigger role in 'Linger' then Grace does.

In 'Shiver' the only points of view you got were Grace and Sam's. However, in 'Linger' you get Grace, Sam, Cole and Isabel. Ms. Stiefvater has the tendency to switch perspectives a lot, however, and sometimes it is in the middle of the chapter. So, definitely one of the main down falls of this book is that sometimes you can get confused on to who's perspective you are reading from at the time. However, I refuse to let this fact ruin this book for me.

You can visually see all four characters physically and emotionally maturing during 'Linger' and it is a very enduring thing.

You feel Grace's sickness very strongly and the overwhelming helplessness that her friends (Sam and Isabel) feel because they know there is nothing they can do to help her, while she dies right in front of them. That's when Cole does the greatest thing ever and truly steps up to the bat to let you know he will definitely be a dominant character in 'Forever' when it comes out. He helps Isabel and Sam find a cure to save Grace from death's very grip. The cure, let the wolf in her finally come out.

At the end of 'Linger', Grace does become a wolf and Sam and Isabel are left without her. To suffer their loss of her in very different fashion's. However, for some reason Cole seems almost unaffected by the wolf curse and I'm more then sure that he will be a big part of them finding a cure to bring Grace back to the in 'Forever'.

This series has become very dear to me and has worked its way into my top favorite series. So to the people out there who were hesitant on reading this series, I would definitely say that its worth you reading. I've already suggested it to my other friends and have let them borrow my copies.

P.S. Ms. Stiefvater has mastered the art of the 'cliff hanger'.