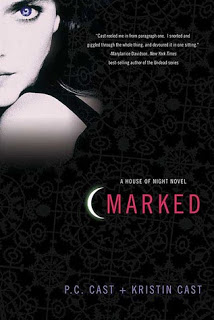 
Enter the dark, magical world of The House of Night, a world very much like our own, except here vampyres have always existed. Sixteen-year-old Zoey Redbird has just nee Marked as a fledgling vampyre. That is, if she makes it through the Change - and not all of those who are Marked do. It sucks to begin a new life, especially away from her friends, and on top of that, Zoey is no average fledgling. She has been chosen as special by the vampyre Goddess Nyx. Zoey discovers she has amazing powers, but along with her powers come bloodlust and an unfortunate ability to Imprint her human ex-boyfriend. To add to her stress, she is not the only fledgling at the House of Night with special powers. When she discovers that the leader of the Dark Daughters, the school's most elite group, is misusing her Goddess-given gifts, Zoey, must look deep within herself for the courage to embrace her destiny - with a little help from her new vampyre friends.

However, there were a few things that didn't sit right with me. The story seemed really rushed while at the same time not a lot happened. The whole book encompassed the total of about a week of Zoey's new life as a vampyre and already she has a new boyfriend, she has upended the school bitch, taken over the rule of High Priestess in training, gained enemies and started events that will undoubtedly change the school and everyone's life in the books forever. In a week... Just seemed way to rushed and fast for me or for any one person to do all of that. But it makes it feel like this world is thrust upon you an you have to automatically understand where everything is coming from. It just doesn't feel like the world was fully developed.

Besides this though, I did enjoy the book and look forward to reading 'Betrayed' and the several other books in this series. I really enjoy all the characters, they are enjoyable. Zoey's inner monologue had me cracking up at several parts and had my dad asking me what the heck was going on in the book now. And the fact that by page 65, Zoey was already stumbling upon Erik getting a bj, I was definitely not expecting at all for most YA books skip around love scenes between its characters. Not taking into fact that sex is definitely a part of life that teenagers struggle through as well, so it must be taken into thought wen you are writing about a teenage character coming of age, because it is a part of their life's as well as it is for adults.

My favorite character has got to be Stevie Rae, besides Zoey and Erik of course and I don't fully trust Neferet. However, I'm going to wrap this up now and start on 'Betrayal' and see where P.C. and Kristin Cast take their series.