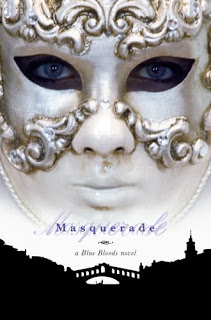 
Schuyler Van Alen wants an explanation or the mysterious deaths of young vampires. With her best friend, Oliver, Schuyler travels to Italy in the hope of finding the one man who can help, her grandfather. Meanwhile, back in New York, preparations are feverishly under way for the Four Hundred Ball, an exclusive gala hosted by the city's wealthy, powerful, and unhuman, a true Blue Blood affair.

But it's at the after-party, a masquerade ball thrown by the cunning Mimi Force, that the real danger lurks. Hidden behind the masks is a revelation that will forever change the course of a young vampire's destiny.

'Masquerade' was even better than 'Blue Bloods'. I have quit enjoyed this book. It has helped to develop the characters a lot more and has also introduced a very interesting character (Kingsley) as well. There were a lot of twists that I didn't see coming and a few that I had figured out already. However, whenever an author is able to pull a twist that I did not see coming, I give that author great credit. For most have not been able to stump me in that fashion. However, I must say Melissa de la Cruz, knows how to weave a tale and keep you interested all at the same time. She keeps leaving you with cliffhangers where you just have to keep reading on so you can come to the end and figure out what it is that is actually going on.

I like the development between Jack and Schuyler even more. I can see a little bit of where there is a true affection. But, I do still see them as using each other for their own personal gains at this point. Jack is still wrapped around Mimi's finger for him to be a truly beloved character in my opinion, but his status has definitely raised a little bit since Blue Bloods.

Oliver remains to be one of my favorite characters, yet at the same time I see his character coming to a very hard and dark place. For the simple fact of how much he is in love with Schuyler and how much she loves him as a brother. And this new bond between them will only make it that much harder when they are inevitably ripped apart.

I am still a little confused on what exactly is going on with Bliss, so hopefully a little more is revealed in 'Revelations' to make that more understandable.

& by the title of the third book, one would be left with the impression that a lot of secrets are going to be coming out.