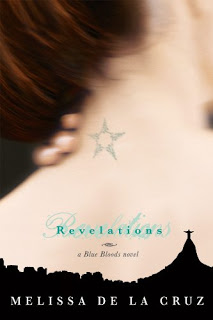 
Schuyler Van Alen's blood legacy has just been called into question: is the young vampire in fact a Blue Blood, or is it the sinister Silver Blood that runs through her veins? As controversy swirls, Schuyler is left stranded in the Force household, trapped under the same roof as her cunning nemesis, Mimi Force, and her forbidden crush, Jack Force.

When an ancient place of power is threatened in Rio de Janeiro, however, the Blue Bloods need Schuyler on their side. The stakes are high, the battle is bloody, and through it all, schuyler is torn between duty and passion, love and freedom.

I finished reading this book in one day. This was after having to attend college from 9am - 3:30pm. Like I have said before, this series is REALLY easy to read. But let me get into my review.

While I do enjoy this world, this series is starting to a lag a little for me. Don't get me wrong, it is a unique universe and world that Ms. de la Cruz has created and I definitely do enjoy the unique version she has created on Angels and Vampires. But.... Idk, the series just doesn't seem to be doing it for me as much as it did to begin with.

I still do not feel the love story that is supposed to be there. The love that Schuyler is supposed to have for Jack and even the love that she is supposed to have for Oliver, just seems so artificial. It seems forced to allow the book to have a love story in it as well. I do believe Oliver loves Schuyler, but does Jack even know what love is? He is drawn to Schuyler because she is light incarnate from her Mother Gabrielle (whom in other life times he has loved her Mother because she is good) and Jack or Abaddon if you will, is attracted to the light to cleanse his soul of the darkness that he is inside.

Also, at least for myself, who thinks like a writer because I hope to one day be published myself, the twists in the story are starting to become way to obvious. From the beginning of the book, I had already figured out for the most part how it was going to go. I will admit I didn't have everything down, simply because I was a little confused on how Ms. de la Cruz was going to put it all together and get it to work. But I had figured out that Jordan (The Watcher), that Bliss was the true villain as well as Schuyler's sister, that Schuyler, Jack & Oliver would be caught in a love triangle. & to be honest I haven't trusted Bliss' 'parents' from book one (Blue Bloods). It is sad that Schuyler is now without both her grandparents, because Charles is a weak character and I don't hold out much hope for him.

However, despite all of this, I do hold out hope for book 4 (The Van Alen Legacy). Ever since I started this series, it is this particular book in general that I have been drawn to and have wanted to read the most. It is this book that I hope will save the series for me. It is in this book that I hope Jack's character is better developed and he can step up as a man and fight against Mimi's influence. I hope Ms. de la Cruz is able to pull together Schuyler's love story effectively, because I like Schuyler as a character.