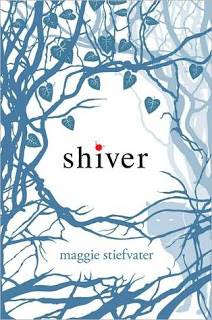 the cold.
Grace has spent years watching the wolves behind her house. One yellow-eyed wolf - her wolf - watches back. He feels deeply familiar to her, but she doesn't know why.

the heat.
Sam has lived two lives. As a wolf, he keeps the silent company of the girl he loves. And then, for a short time each year, he is human, never daring to talk to Grace... until now.

the shiver.
For Grace and Sam, love has always been kept at a distance. But once it's spoken, it cannot be denied. Sam must fight to stay human - and Grace must fight to keep him - even if it means taking on the scars of the past, the fragility of the present, and the impossibility of the future.

This was an adorably cute love story. I cried, I laughed, I hated the characters and I felt there pain. Was it a perfect story? Not by a long shot. Was it absolutely adorable like I have already stated? Why yes it was.

I don't think I can follow the whole factor on how getting cold makes them transform into wolves and when its warm enough they can become human once more and after about 20 years or so, or shorter in Sam's case (10 years), they will lose their human selves all together and just be a wolf. I don't necessarily like that whole concept. But the way that Grace adores Sam even in his wolf form, is amazing. And the way Ms. Stiefvater writes this story is endearing.

I like the way Isabell turns from the witch of the story (human nemesis) to one of Grace's best friends. It is sort of a loose end though, because Rachel (one of Grace's original friends) just seems to fade into the background and once you find out what Olivia has been hiding, even before then if you pay attention, it is very obvious on what is going on with her. I find it weir that Sam of all people could not pick up on what was happening to Olivia thanks to Jack.

Shelby (the evil she wolf) is a very questionable character and easily the biggest enemy for Grace to watch out for. The way she was able to survive after being shot by Grace's dad like it was nothing did not sit well with me.

However, let's wrap it all up. It was a cute story. There are some loose ends left to be closed, but that's what the next 2 books are for. I do kind of wish Ms. Stiefvater would have shown what happened to Sam during the 'Curing' period and how he was able to be saved but it killed Jack. But besides that, I overall enjoyed the story. I have a feeling that the second one is going to irritate me, but I am easily irritated with love stories when the two lovers are ripped away from one another after just finding each other. But, it is a cute story that you can read an enjoy.