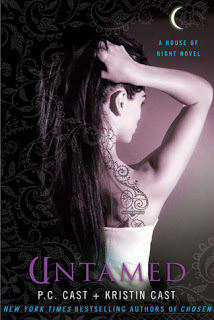 
Life sucks when your friends are pissed at you. Just ask Zoey Redbird - she's become an expert at suckiness. In one week she has gone from having three boyfriends to having none & from having a close group of friends who trusted and supported her to being an outcast. Speaking of friends, of the two Zoey has left, one is undead & one is unMarked. & Neferet has declared war on humans, which Zoey knows in her heart is wrong. But will anyone listen to her? Zoey's adventures at vampyre finishing school take a wild & dangerous turn as loyalties are tested, shocking true intentions come to light & an ancient evil is awakened.

Okay, so 'Untamed' was better than 'Chosen', bust still could have been a lot better. Once again the Cast's reiterated EVRYTHING that had happened in the previous books. Like 'we' (the few, the brave & the crazy that are still reading this series for some reason) already know what happened in the previous books. Hello, here is your clue, please don't repeat EVRYTHING. People that start in the middle of a series don't deserve to understand what is going on. Means they need to go from book one and work their way up like everyone else. Gah!

Anyways, I like Stark (the character). The fact that Stark and Zoey were like soul mates after meeting for one day, and he died in her arms later that night and they kissed. I mean, WTF! You have known the dude for ONE DAY!!!! Has no one ever heard the word 'LUST'. Yes, LUST. Not Soul Mate! I mean, come one, get to know someone before your all gah gah over them.

The saddest part of the book was when Duchess started to howl after Stark's death. I'm a dog lover and I can only imagine how heart breaking that would have been to witness. I mean it was hard to mourn Stark's passing, knowing that he would rise from the dead eventually anyways.

The person I feel the worst for in this series is Erik. He obviously still loves and cares for Zoey and here is Zoey who has 'supposedly' given up on guys and relationships, already falling for another guy after knowing him ONE DAY. Erik deserves so much better, while I believe they would be truly beautiful together, I can just no longer like Zoey. Maybe one day, she will stop being a child, or at least stop being written as a child.

The biggest thing I found silly in this book was the prophecy. I mean it was WAY too obvious they were talking about Stevie Rae being the Earth that was going to be bleeding to bring back Kalona. And that Neferet would be the evil dark queen who feeds off of death. I mean hello, she helped bring back dead kids. Can anyone say DUH!!!!!!

Dear Cast's, why do you write all your characters as dumb airheads?