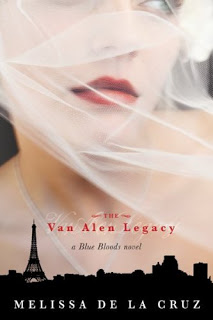 
With the stunning revelation surrounding Bliss' true identity comes the growing threat of the sinister Silver Bloods. Once left to live the glamorous life in New York City, the Blue Bloods now find themselves in an epic battle for survival. Not to worry; love is still in the air for the young vampires of the Upper East Side. Or is it? Schuyler has made her choice. She has forsaken Jack for Oliver, choosing human over vampire. But old loves die hard... And even coldhearted Mimi seems to suffer from the ties that bind.

I had to go and drive to see my sister for her birthday, so I was unable to read this book as fast as I would have liked because I was really looking forward to this one.

It totally took the series in a different direction. I liked how Ms. de la Cruz had each chapter as a different perspective from either Schuyler, Bliss or Mimi. It was interesting to see how the series was developing from the point of view of all three main female characters.

I started to care for Jack's character more in this book and finally saw him as a real loving person, who truly does love Schuyler. I am glad that in the end they finally run away together, only took them 4 books. However, I do feel sorry for Oliver in the end.

Bliss' story was better explained and I understand that now, but it is still a little confusing on how her mother and father came together to create her especially since she said it was done in love. But I guess that will be explained in the end.

Overall, 'The Van Alen Legacy' saved the series for me and I did enjoy this book. =]