Today is an awesome day. Why you may ask? Well.... because today I bring you an interview with author Kelly Creagh, author of 'Nevermore' and soon to be 'Enshadowed'. =D

I am very excited to bring you this interview, with the Uh-maze-ing Kelly Creagh. Who has been ever so kind as to give us an interview. 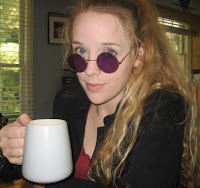 How about a little introduction first:
Sure! In addition to being an author, I am a professional bellydance performer and instructor here in my hometown of Louisville, Kentucky. I live in a very old Victorian neighborhood and have two terrier-mix dogs, Annabel and Jack. I love working in coffee shops and also browsing through the YA section of the bookstore and library. Nevermore is my first novel.


Q1: Where did the inspiration for 'Nevermore' come from?

Nevermore began as a free-writing exercise. I had the loose idea of pairing a cheerleader and a goth together for an English project. I also knew that my goth character carried a sketchbook, and I was toying with the idea that his stories and drawings could come to life. Poe just happened to be who I plucked out of my mind when I was wondering what their project would focus on. I began studying Poe on a surface level and that’s when things got weird. I read about his mysterious death and the Poe Toaster and other strange occurrences having to do with Poe’s life and death. After that, Poe began to seep into the story and take over until he became the very backbone. Weird stuff began to happen in my life. I even received a birthday card from Poe after my first visit to Baltimore. It included a photograph of me that I did not recognize. This was during the early drafting stages of Nevermore so very few people knew about the book. To this day, I have no idea who sent it!

Q2: What was your favorite part to write?
Two scenes. The scene in Varen’s room when Varen reads Ulalume to Isobel and the Grim Façade and Masquerade ball. Pinfeathers in particular was a very fun character to write.

Q3: Are the characters in 'Nevermore' like yourself or any one you know in your life?
I often thing Isobel and Varen are the two extremes of my personality. Isobel is bubbly and enjoys being girly. Varen, however, broods and stews on dark imaginings. Gwen was actually inspired by two close friends.

Q4: With so many reference's & works of Poe interwoven within 'Nevermore', was there any research needed and if so, what was that like?
There was actually a lot of research involved. But it never felt like research. When I began to discover the strange facts about Poe’s death, I really dove in to finding out about his life. I also began to really read and soak up his works. I listened to them on audio quite a lot and discovered a common theme of dreams. That’s where I got the idea from the dream-world. It was very weird how fitting my plans for backstory fit in with the stories and poems I was reading. I think a lot of Nevermore was born out of my subconscious and picking up things out of Poe’s works subliminally. I also took the opportunity to travel to Baltimore to see Poe’s home and the graveyard where he is buried. I’ve now been to Richmond once and to Baltimore several times. Actually, the graveyard where Poe is buried in Baltimore will play a very significant role in Enshadowed, which is the sequel to Nevermore.

Q5: Varen is such a deep character with many different facet's to his personality, what was it like writing his character?
Varen is a fascinating character to write. He is also a touching character to write and, at times, frightening. I know what is going on in his head and while that was often fun to put on the page, it was also difficult. He is also the one character who likes to elude me. He doesn’t say much in general. When he does speak, what he says caries a lot of volume and weight. So he’s one character that I have to really listen to closely.


Something fun... & Random.
What are your favorite 3 movies of all time?
Actually, my favorite movies may also be Varen’s.

Edward Scissorhands and The Nightmare Before Christmas.  I’m thinking hard to come up with a third and, what seems to want to swim to the surface is The Breakfast Club.

That was an awesome interview and I had a LOT of fun talking with Ms. Creagh. I have my review of 'Nevermore' posted up. You can take a look at it, HERE!
If you would like to get a hold of Ms. Creagh I have provided some links below. =D
Thank you once again, Ms. Creagh and I look forward to reading 'Enshadowed' when it comes out later this coming year.
Email: kellycreagh@kellycreagh.com
Goodreads
Twitter
Facebook
Website
Posted by Cassie S. at 1:30 AM