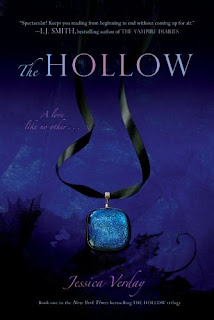 Author: Jessica Verday
Publisher: Simon Pulse
Release Date: September 1, 2009
Page Count: 509
Chapter Count: 25
Named Chapters: Yes
Buy It: Amazon / B&N
When Abbey's best friend, Kristen, vanishes at the bridge near Sleepy Hallow Cemetery, everyone else is all too quick to accept that Kristen is dead... and rumors fly that her death was no accident. Abbey goes through the motions of mourning her best friend, but privately, she refuses to believe that Kristen is really gone. Then she meets Caspian, the gorgeous and mysterious boy who shows up out of nowhere at Kristen's funeral and keeps reappearing in Abbey's life. Caspian clearly has secrets of his own, but he's the only person who makes Abbey feel normal again... but also special.
Just when Abbey starts to feel that she might survive all this, she learns a secret that makes her question everything she thought she knew about her best friend. How could Kristen have kept silent about so much? As Abbey struggles to understand Kristen's betrayal, she uncovers a frightening truth that nearly unravels her - one that will challenge her emerging love for Caspian, as well as her own sanity.
Review:


[Sigh]!. Blah, blah, blah, blah, BLAH!. I was just left SO unimpressed by this book. I felt like crying at the end because it was just so boring. Nothing really happened. She came, she saw, she fell madly in love with 5 minutes while supposedly dealing with her best friends death. A best friend that in the end she didn't know [cause that said friend was keeping a TON of secrets from her]. I understand that everybody has their secrets, but DAMN, I don't think I've ever kept that much from any of my friends. Then again, I am also to much of a big mouth to keep secrets. [=D lol].

But this whole book rubbed me wrong. Abbey fell in love with Caspian, like instantly. She found herself giddy and light-hearted barely after the first meeting and she didn't even know anything about him. Except that he was a strange boy that appeared at her best friend's funeral, but he didn't even know her best friend. Personally that would have creeped me out.
The introduction of Ben and him being the only one in her school that was even nice to her, just seemed so forced. The fact that you can tell he obviously had a sweet spot for Kristen & then all of a sudden he is interested in [and tries to kiss] Abbey, even though before Kristen's disappearance, from all appearances, he didn't even pay attention to her, just shots off warning bells in my head. & the fact that she wasn't even suspicious when Caspian didn't have a cell phone, a home phone, an email, or even used the internet at all. That would be really suspicious to me. That and the fact that he only appeared to her whenever she was by herself. She was never around him and anybody else throughout this entire book. Gah!
& Nikolas and Katy. Don't even get me started on them. Nikolas is the headless horseman and Katy is really Katrina van Tassel? & they are in love and married? What? Im sooo lost. First off, isn't the headless horseman a ghost of sorts? How is he still with Katrina if she wasn't a ghost [but they fell in love], even still there. Ms. Verday made it seem like only special ghost's stay around [Shade's]. Gah, this whole story confused me. None of it made sense and none of it was explained. Like why, can she see the ghost's but nobody else their can. It is said because is was born there and has a strong connection to the legend and town, but that explains half of the town and none of them see ghosts or the headless horseman. And if that is the reason, then why is she barely now seeing the ghosts?
[Sigh]! I had such good expectations for this book. & I almost even bought, the second book. Now I am glad that I didn't. I, of course will eventually get the other books and read them in hopes that it explains more of the story and saves this series. But for the first book in the series, it was really disappointing.