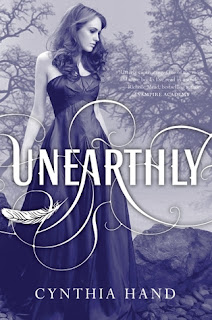 Author: Cynthia Hand
Publisher: Harper Teen
Release Date: January 4, 2011
Page Count: 435
Chapter Count: 22
Named Chapters: Yes
Buy It: Amazon / B&N
When Clara Gardner learns she's part angel, her entire life changes. She now has a purpose, a specific task she was put on this earth to accomplish, except she doesn't know what it is. Her visions of a raging forest fire and a mysterious boy lead her to a new high school in a new town but provide no clear instruction. As Clara tries to find her way in a world she no longer understands, she encounters unseen dangers and choices she never thought she'd have to make - between the boy in her vision and the boy in her life, between honesty and deceit, love and duty, good and evil. When the fire from her vision finally ignites, will Clara be ready to face her destiny?
Review:
Ow but how I LOVED this book. I had heard nothing but good things and I was really excited when I finally got this book in paperback from work. And this book most definitely did not fail me.
Clara was such a strong, vibrant character that was easy to fall in love with. While her early infatuation and inability to speak around Christian slightly irritated me. That was the worst that I could say for her, because in a way I could understand why she was so tongue tied, she had just found the guy (literally) from her dreams. However, Christian was already dating Kay (and of course they are the most popular couple in school).
But back up. The absolute best part of this book by far can be deducted to two words: Tucker Avery.

Oh my gosh, how I am in love. Tucker, he just stole my heart right away with just a few paragraphs.
"You're the girl with the Prius who almost rear-ended my tuck this morning," he says.
"Oh, sorry about that."
He looks me up and down. I feel myself blush for probably the hundredth time that day.
"From California, right?" The word California seems like an insult coming from him.
"Tucker," Wendy warns, pulling his arm.
"Well, I doubt I would have done any damage to your truck if I'd hit you," I retort. "It looks like the back end is about to rust off."
Wendy's eyes widen. She seems genuinely alarmed.
Tucker scoffs. "That rusty truck will probably be towing you out of a snowbank next time there's a storm."
BAM! & I WAS IN LOVE.

How I wanted Clara to see Tucker, to just look at him, the whole time she was drooling over Christian. I mean don't get me wrong, Christian was a sweet boy, likeable and everything. But Tucker... Tucker... Tucker's a gentlemen cowboy. You can't compete with that.
However, enough fan girl drooling over Tucker. On to the story behind 'Unearthly'.
It was a great story and there were a lot of things that happened in this book that you don't typically see in a lot of YA books. Simple things, skiing, actually rivalry between siblings, parent-child love hate relationships. I loved this story because it just felt so right, so real. I was sucked in, and 'Unearthly' simply refused to let me go until the very end.
I must say, that there were some things that happened, that I could in a way see coming or had a hunch on, however, for once that did not deducted from the story for me like it has from a lot of other YA books that are to predictable. Because were as, there were things I saw coming, they were all things that I wanted to happen, it wasn't anything that made the book boring.
And to watch Tucker and Clara falling in love with one another. It was breathtaking. It was REAL. You got to spend their summer love together, a summer that blossomed into an amazing sweet relationship for the both of them. Oh my gosh, how I wish they were real. How I wish I could have two friends like them. To finally see and believe in love that is right in front of me.
I also loved the friendship triangle between Clara, Wendy and Angela. I can understand where Clara was coming. It it so hard to deal with two best friends at the same time, to make sure they are both getting enough of your attention so that one doesn't feel left out. However, I must admit that I was kind of frustrated with Clara when she sorta abandoned Wendy for Angela. Even if it was for a school project originally, it turned into something completely different that Wendy could never compete with. And I understand that there is something that Angela and Clara share that Wendy can never compete with, but Wendy was the one that instantly took Clara in on the first day of school. Gave her people to hang out with, gave her her friendship. That should have been more precious to Clara then to really appeared at first. I must say that she does live up to it however, and make amends and they remain really close friends. I just wish it wouldn't of happened. But what friendship doesn't have reasonable arguments? That is after all what makes relationship's (true relationships) so strong. And that Wendy was okay with Clara taking her twin brother (Tucker : fan girl squeal). That is even more amazing.
But you know why I loved this book. And I know I have already given you like a million different reasons.... *cough* TUCKER! *cough* I think it all comes down to the fact that I wanted to be Clara. I wanted to be living that life. For once I found a story I was jealous of. I was jealous of Clara. LOL. I loved the world that Ms. Hand created in 'Unearthly' and I am SOOOO impatiently waiting for the release of 'Hallowed' that comes out next month.... OW PLEASE CANT YOU GET HERE ANY FASTER!!!!...
But enough talk with all my love, jealousy and fan girl squeals. Go out and get this book already. Read it, because I promise you you won't be disappointed. <3<3<3

[The above quote was taken from the book 'Unearthly' by Cynthia Hand, from page 59. I have no claim upon those words.]
Posted by Cassie S. at 2:57 AM