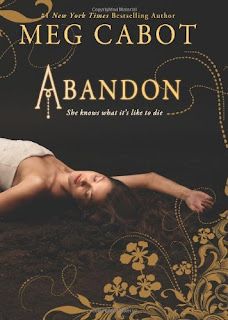 Buy It: Amazon / B&N
She knows what it's like to die
Now Death wants her back
Pierce knows what it's like to die, because she's done it before. Though she tried returning to the life she knew before the accident, Pierce can't help but feel at once a part of this world, and apart from it. Yet she's never alone... because someone is always watching her.
Now she's moved to a new town, but even here, he finds her. Pierce knows he's no guardian angel, and his dark world isn't exactly heaven, yet she can't stay away... especially since he always appears when she least expects it, but exactly when she needs him most.
If she lets herself fall further, Pierce may just find herself back in the one place she most fears: the Underworld.
The myth of Persephone...
darkly reimagined
Opening Sentence: Anything can happen in the blink of an eye.
Review:
This is probably the hardest book review I have done to date.
In the beginning I will willingly admit that I was not a fan. Not at all. This book is written in such a different fashion then anything I have ever seen before. It was dark, it was gritty, it was confusing... but overall, it was absolutely BREATHTAKING!
Pierce Olivera is simply trying to find her place in life after experiencing an NDE (near death experience) and travelling to the Underworld and meeting... Him. John. Who is he? What is it that he wants with her? How does he always appear out of no where when she needs his help the most? These are all questions that Pierce is battling with. Especially now that her and her mother have moved back to her mother's home town and he... is once again... there.
This book only expands approximately the course of 2 or 3 days of Pierce's present life, however, with the multiple flashbacks (that come out of no where), it appears to expand months of her life. The way 'Abandon' is written is initially very confusing. The one thing that kept going through my mind was, "what the heck is going on here?", however, once you are able to keep up with the consciousness of Pierce, you won't be able to put this book down. At least I wasn't able to. That and the fact that this book was always on my mind.
The development between Pierce and John is subtle, but quite visually there. I loved every moment of their time together and when they were finally able to break down both of their barriers and simply be themselves around one another, I felt like clapping. Silly, but true. The character development (for Pierce and John) is there. The friendships (while not extremely important in this book) is there, for what it is worth. There was no part of this book that I saw coming or found way to clique or boring.
The twist at the end of the book. OME! I sooo... did not see it coming. The ending of the book, I will admit, I am not a huge fan of, but it makes sense. Especially sense this is a retelling of the mythology of Persephone. Would I recommend this book. Absolutely. But my only warning. Be prepared to read a book that may take a while to get into.