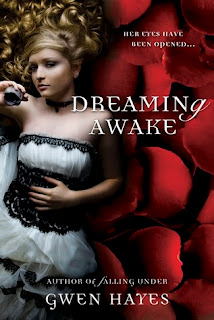 When Theia Alderson first encountered a mysterious, handsome boy in her dreams, she never imagined how finding Haden Black - and falling in love - could change her life. To save Haden, Theia sacrificed everything. And the dangerous bargain she made could have lasting repercussions.

Now Theia has returned to Serendipity Falls, and she finds herself struggling with the same deadly hungers that have tortured Haden. When students at their high school fall prey to a mysterious illness, Theia can't help but wonder whether Haden's control is slipping - and how much longer she'll have a grip on her own.

And still the nightmare realm of Under won't let them go. Someone from Haden's past is determined to destroy Theia from the inside out, starting with those closest to her, forcing Theia to choose between family and friends and a love that may have been doomed from the start....

*Sigh...* I went into this book wanting to love it so bad. But sadly, in a lot of ways, it fell short for me. Now don't get me wrong, I still enjoyed it, but once again, it took till the very end for me to even start enjoying what I was reading and not be frustrated with it. And if I find myself frustrated with most of a book, I find myself a very sad camper indeed.

First off. Haden saved Theia from Under in the first book. And how does she repay his undying loyalty to her even when he couldn't even remember her for a part of 'Falling Under'. She breaks up with him in 'Dreaming Awake', because it's just to much for her. Eck... (insert eye roll here). I cannot express in enough words how much I HATE when 2 characters break up in a series. Because in the end you know that they are going to get back together (especially in this series were there's not even a love triangle). It just seems sooo pointless to me, it was all a way to give the book more length and try to fool you into thinking that more happens in this book then what really goes down. Because trust me when I say, not much of interest happens.

And the thing that entranced me most about 'Falling Under' (the world of Under and all the crazy stuff that goes on there) you have to get through like 200 pages of 'boring' before you even get another dose of it.

I will admit that there were some parts that got me and had me questioning about what was going on (especially the parts with Mike) but almost everything else you could see coming. Like the fact that Mara comes after Theia and Haden. I mean come on, she's the demon queen of Under and Haden's mother, do you honestly think she would just let you go without any repercussions, especially when she warned you in 'Falling Under' that should you disobey her orders she would make you regret it. Common sense people.

The last 100 pages of the book, however, were actually pretty good though. It was like a completely different switch of events. Things became exciting again, I shed a few tears (because something VERY sad and unexpected happens) and Theia and Haden are working together again to combat the evil that is Mara, and even Theia's friends get to join in on the action. The ending of the book, just like in 'Falling Under' was enthralling and mesmerizing. Now I ask myself, why couldn't this have taken place throughout the entire book instead of just the ending?

I am sad to report that for the majority of it, 'Dreaming Awake' has caught a bad case of second-bookitis. For those of you able to stick it out, the ending will be worth it, as long as you can deal with another colossal cliff hanger.