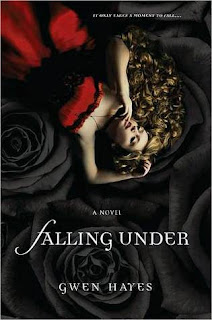 Theia Alderson has always led a sheltered life in the small California town of Serendipity Falls. But when a devastatingly handsome boy appears in the halls of her school, Theia knows she's seen Haden before- not around town, but in her dreams.

As the Haden of both the night and the day beckons her closer one moment and pushes her away the next, the only thing Theia knows for sure is that the incredible pull she feels towards him is stronger than her fear.

And when she discovers what Haden truly is, Theia's not sure if she wants to resist him, even if the cost is her soul.

Where to start with this book? There were quite a few negatives for me, yet the positives counter acted them in my opinion.

This was originally a very difficult book to get into, mainly because it jumped right into all the action (without properly explaining some things in the beginning) that made it rather confusing. Ms. Hayes, had the tendency to switch between (what you later found out in the book) was the dream world and the world Theia lived in. So at any given point, besides the obvious (dancing skeletons, goblins and other creepy creatures) you never knew what world you were currently in. Yet at the same time, while this confused me, it was also what drug me into the book, that and the great characters and their interactions.

Theia, Donny and Amelia (Ame for short) could not have been any different from one another. However, they complimented each other perfectly. And you could tell the honest and true friendship that they shared between one another. They were all a breath of fresh air in my opinion when it comes to YA heroines.
There was never a forced moment in this book, but it was also this very thing that made the middle part of it DRAG. And not in a good way. By the middle of the book, I was sort of bored with it all and the book really didn't seem to be going any where for me. I was finding myself crossed eyed quite often just by trying to read parts of it.

The redeeming fact about it was the ending. OME, how I did not see it coming. Oh, the cliff hanger of all cliff hangers in a book. If there was an award for most agonizing cliff hangers of all time I do believe Ms. Hayes would have won hands down. How can you end a book there and torture your readers so? Thankfully I had a copy of 'Dreaming Awake' with me already.

Altogether, I was not originally a fan of this book. It had the tenacity to grow on me by the ending and I knew I had 'Fallen Under'.