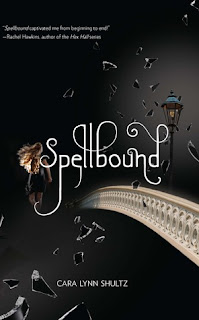 Named Chapters: No
Format: Paperback
Buy It: Amazon / B&N
What's a girl to do
when meeting
The One means
she's cursed to die
a horrible death?
Life hasn't been easy on sixteen-year-old Emma Connor, so a new start in New York may be just the change she needs. But the posh Upper East Side prep school she has to attend? Not so much. Friendly faces are few and far between, except for one that she's irresistibly drawn to - Brendan Salinger, the guy with the rock-star good looks and the richest kid in school, who might just be her very own white knight.
But even when Brendan inexplicably turns cold, Emma can't stop staring. Ever since she laid eyes on him, strange things have been happening. Streetlamps go out wherever she walks, and Emma's been having the oddest dreams: visions of herself in past lives - visions that warn her to stay away from Brendan. Or else.
Opening Sentence: It's always embarrassing to have someone take you to school.
Review:
'Spellbound' by Cara Lynn Schultz was a genuinely enjoyable book. It was satisfying and took a unique twist on soul mates.
I found myself sympathizing with Emma. And falling in love with Brendan myself. LOL. Face an agonizing death to be with the one I love (when it's Brendan), oh heck yea! But of course, they are able to over come this curse. With the help of friends (well... one witch, in particular).
That must of been my biggest issue with this book (there weren't that many) was that it was not necessarily predictable, but you could see where this book was going. Simply because there was no where else for it to go. The curse had to be overcome by the end, unless you were going to kill off the main character and seeing how this is a series, I couldn't see that happening. And you already knew where the danger was coming from, because of the 2 people that Emma managed to tick off in the book
Besides, these 2 facts though, 'Spellbound' was awesome. Ashley was such a cutey pie. Christine was the best aunt EVER. Cisco was a true friend to Emma. And Brendan and Emma's love was real. While, I didn't like the clique (he's nice / now he's treating me horribly / now he loves me), over-used plot line. I could still see where their love was developing from. That and this book managed to make me melancholy (I miss living in NY, now).
There was no part of this book that was unnecessary or over done. It was well written and very sweetly captivating. It held my attention and left me wondering what was going to happen next in this series.