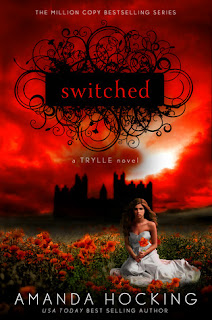 Author: Amanda Hocking
Publisher: St. Martin's Griffin
Release Date: July 12, 2010
Page Count: 293
Chapter Count: 24
Named Chapters: Yes
Format: Paperback
Buy It: Amazon / B&N
Enter the World of the Trylle
When Wendy Everly was six years old, her mother was convinced she was a monster and tried to kill her. Eleven years later, Wendy discovers her mother might have been right. She's not the person she's always believed herself to be, and her whole life begins to unravel - all because of Finn Holmes.
Finn is a mysterious guy who always seems to be watching her. Every encounter leaves her deeply shaken... though it has more to do with her fierce attraction to him than she'd ever admit. But it isn't long before he reveals the truth: Wendy is a changeling who was switched at birth - and he's come to take her home.
Now Wendy's about to journey to a magical world she never knew existed, one that's both beautiful and frightening. And where she must leave her old life behind to discover who she's meant to become....

Opening Sentence: A couple things made that day stand out more than any other: it was my sixth birthday, and my mother was wielding a knife.
Review:
I got this book from bn.com when I got a 50% off coupon sent to me. I had known about it for a while, however, it was only available on nook or kindle, so I was unable to read it. I was excited to get it and read it because I had heard so much about it.
The beginning of this book annoyed me. It read really amateurish. There were so many simple grammatical errors and just read really middle schoolish. However, I stuck with it and it steadily got a lot better. It started off strange when Wendy was so easily following in love with someone that was being creepy (her own words) and kept staring at her intensely. That would put me off from a person, not want to be around them. And then she runs away with him when he finally reveals to her that she's a changeling and promises her a better life.
Which she doesn't necessarily get. Because she still has an inattentive mother even when she gets to her Troll home.
However, what really frustrated me about this book, wasn't the writing or simple errors. It was that Wendy was so Blind. There were simple obvious things going on in this book, that I picked up on so early but then it took her forever to figure out. Like who Rhys really was, the blonde hair should of given it right away (I was like OMG, it's him). My eyes kept rolling when she couldn't figure these things out.
It was a new take on Trolls and I haven't read a book just about Trolls before, so I definitely liked the change of pace from other YA books. And the last few scenes between Wendy and Finn were absolutely scorching. These were all great things in the book. And there were interesting characters, so it was definitely not all negative. However, the last part of the book started to remind of 'The VA' series, LOL strange enough. I still really look forward to reading 'Torn' to see what happens between Wendy and Finn and figure out what world she finally chooses.
If you are looking for a simple, easy read with a new concept. This book is for you.

Ooh thanks for the honest review!

@Primrose: Of course. Thats what my blog and I are here for. =D

Not my typical reading, but enjoyable light reading!
Hocking has an uncanny ability to write fascinating little stories that are compellingly addicting. Her books are not my typical reading fare - I tend more toward the adult mysteries and suspense type of thing - however ever since I picked up Hocking's My Blood Approves series, I've been strangely addicted to her work.

@Canada: I really enjoyed 'Switched' as well. I haven't read her 'My Blood Approves' series. If they ever come out in paperback I will definitely have to take a look at them. =D