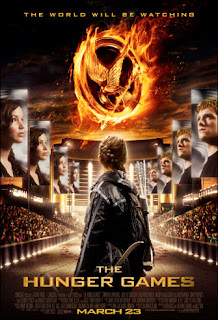 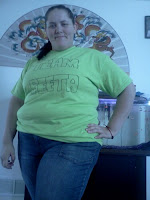 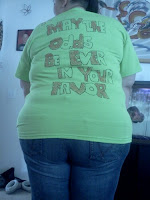 Well of course I went to see The Hunger Games yesterday. I was up bright and early to see one of my most anticipated movies for this entire year. I stayed up late after work to make the shirt I wore (pictured above), then got some sleep, so my cousin and I would be there early to get good seats. Unfortunately, we got there with about 20 minutes to spare and there weren't that many seats left so we were stuck on the side. Despite this fact though, I was still jumping in my seat for the movie. I even got a teaser for the last part of the twilight series, Breaking Dawn (Part Two), another one of my most anticipated movies for 2012. Now, I won't say that I was disappointed in the movie, because I absolutely wasn't. I think they did an AMAZING job with the movie and highlighted the most important parts of the book. Jennifer Lawrence (Katniss) and Josh Hutcherson (Peeta) were both amazing choices for their characters. However, I must say that for a good portion of the movie that I was a little bored and kept looking over at my cousin (who hasn't read the book -she's not much of a reader-) and could tell she was a little bored. However, during the reaping where Katniss takes her sisters place and during Rue's death, we both definitely teared up at those parts. For the most part, the movie was amazing, I just wish they would of showed the poverty of District 12 a little better, because they did look a little to healthy. There were small little (nit picky) things I wished could have been changed, however, like I said, for the most part the movie was AMAZING! And I will definitely be going to see it again.
For those of you who have seen it. What did you think of it?
&
For those of you who haven't. Do you plan on seeing it?

I loved the movie and was very impressed by "Katniss's" acting. You could actually see her tremble when she was sent up the shoot to the arena. Wasn't too crazy about the very erratic camera shooting. The camera was going so wild I feel like I missed out on all the other players' costumes during the parade.

@One Sick Cookie: I feel the same about the camera angles. And Jennifer Lawrence was a great Katniss in my opinion. Of course I have to admit that I was to caught up in watching Josh Hutcherson (Peeta) to see some other things. I LOVE PEETA!!!