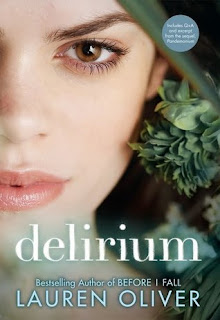 Author: Lauren Oliver
Publisher: HarperTeen
Release Date: February 01, 2011
Page Count: 441
Chapter Count: 27
Named Chapters: No
Format: Paperback
Buy It: Amazon / B&N
Before scientists found the cure, people thought love was a good thing. They didn’t understand that once love -- the deliria -- blooms in your blood, there is no escaping its hold. Things are different now. Scientists are able to eradicate love, and the government demands that all citizens receive the cure upon turning eighteen. Lena Holoway has always looked forward to the day when she’ll be cured. A life without love is a life without pain: safe, measured, predictable, and happy.

But with ninety-five days left until her treatment, Lena does the unthinkable: She falls in love.
Opening Sentence: It has been sixty-four years since the president and the Consortium identified love as a disease, and forty-three since the scientists perfected a cure.
Review:
'Delirium' was actually a rather disappointing read for me. I was really looking forward to reading this book. I had read so many good reviews for it and a lot of the blogs that I follow had nothing but good things to say about the book. Yet, for the life of me, I simply could not get into it or even find myself care about what was going on in it.
Lena as a main character was extremely irritating for me. All I could get out of her as a character was her constantly whining about how hard her life has been and why she couldn't wait to get the cure. But come on, life is hard, that's part of the beauty, because without it you wouldn't be able to appreciate the happy times. I need a strong main character for a book to be good for me, and Lena in my opinion was FAR from a strong character.
I honestly can't even think of one thing I took out of this book. I was skimming it before this review and I reread stuff that I don't even remember reading. By the last 200 pages I was just skimming the pages so that I could get to the end, and by the time Lena and Alex had decided to run away together it was deadly obvious what was going to happen. Heck it was deadly obvious what was going to happen after Alex told Lena her mom might be alive and we find out there was a recent break out at the place her mom was supposed to be. I knew they were going to be caught and have to run for their lives and one of them wouldn't make it out.
It was such a cliqued ending. Alex sacrifices everything for Lena, lets her escape and lets himself be caught and now Lena is in the Wilds all by herself with no clue how she is going to survive without Alex. YAWN!
This book was nothing but SLOW and BORING for me. Which is really sad because I really wanted to love this one. Maybe the next one in the series will step up to the plate and bring something exciting to this story.

Thank you for such an honest review. I think this is the first negative review I have seen for this book.

@Melissa: I had heard nothing but good things for this book as well, so I really thought that I would love it. But I just couldn't get into it. =[ If you have read it, then I'm glad you enjoyed it, and if you haven't yet, hopefully it is something that you enjoy.