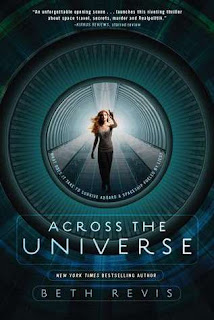 Amy is a cryogenically frozen passenger aboard the spaceship Godspeed. She has left her boyfriend, friends - and planet - behind to join her parents as a member of Project Ark Ship. Amy and her parents believe they will wake on a new planet, Centauri-Earth, three hundred years in the future. But fifty years before Godspeed's scheduled landing, cryo chamber 42 is mysteriously unplugged, and Amy is violently woken from her frozen slumber.

Someone tried to murder her.

Now, Amy is caught inside a tiny world where nothing makes sense. Godspeed's 2,312 passengers have forfeited all control to Eldest, a tyrannical and frightening leader. And Elder, Eldest's rebellious teenage heir, is both fascinated with Amy and eager to discover whether he has what it takes to lead.

Amy desperately wants to trust Elder. But should she put her faith in a boy who has never seen life outside the ship's cold metal walls? All Amy knows is that she and Elder must race to unlock Godspeed's hidden secrets before whoever woke her tries to kill again.

I was really looking forward to reading 'Across the Universe' by Beth Revis. Right from the beginning I was really into it. It dragged me in and didn't let me go. At least not till have way through the book.

Beth was able to implement so many thing into this book, of people stuck in a ship headed to a new Earth that I would have never even thought of. That I never saw half of this book coming. The crazy "mating". The lies that were fuelling the ship. Elder and Amy were sweet together and trying to find who was behind everything. It all worked together. I really enjoyed it all. But afterwards, when some of the secrets were revealed. It just got predictable.

It was obvious who was trying to kill all of the frozens. It was obvious that Eldest was lying about so much stuff. Who the Doctor and Eldest were afraid was still alive. But what really got me and that I for the life of me could not believe, was that they were so far behind on schedule from getting to the planet. The only thing going through my mind was that if they had already been in space for so long and couldn't make it, why didn't they just turn back around. I mean really. Instead they just came up with a terrible hierarchy and kept on chugging along like the engine that could(not).

I don't think that it helped that I accidentally saw the chapter that revealed who awoke Amy. So I just saw it coming. No surprise there.

All together the book was really good and I genuinely enjoyed it. But little pieces all together weren't that great. Together they worked. So all together I definitely look forward to reading 'A Million Suns' when it comes out in paperback.

i loved across the universe
tnx 4 the gr8 review

@RoRo: Not a problem. I love bringing honest and clear reviews to people and my followers. Now I can't wait to get my hands on 'A Million Suns' to see where Ms. Revis takes this series. =D