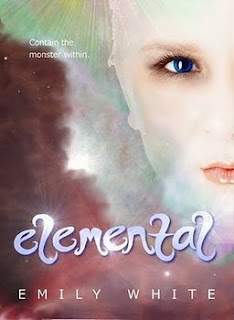 Just because Ella can
burn someone to the ground
with her mind doesn't
mean she should.

But she wants to.

For ten years - ever since she was a small child - Ella has been held prisoner. Now that she has escaped, she needs answers. Who is she? Why was she taken? And who is the boy with the beautiful green eyes who haunts her memories?

Is Ella the prophesied Destructor... or will she be the one who's destroyed?

First off, I want to thank Ms. Kate Kaynak from Spencer Hill Press for sending me an ARC copy of 'Elemental' by Emily White. I love all the people over at Spencer Hill Press for giving me the opportunity to read their amazing books (from some amazing authors) before they have even hit store shelves. You are all doing a great job and I greatly look forward to all the amazing books you have coming out soon.

Now for the review. 'Elemental' by the lovely Ms. Emily White, was WAY different then what I was expecting or even used to reading. I am not much for sci-fi, different worlds and space travel. But when I was reading 'Elemental' and the lovely way that Ms. White writes there were a lot of times that I forgot that this whole story wasn't even taking place on Earth. Or I don't believe it was. That may have been one of the few issues I had with this whole story. It was quit a bit confusing.

In the beginning of the story, I understand that Ella has been locked away on the prisoner ship Sho'ful but how did she get there? How was she taken? How did she disappear from her race without even a fight? This was never explained in the story. And if it was, I must have missed that part. The first few chapters were the hardest for me. Because nothing was really being explained. Who were these people (because it was very obvious that we weren't dealing with people from Earth. Or were we, were we in the future or an alternate reality?). I just don't know. You were thrown into this world without any explanations of where we were, who the people were and how they came to be. We started getting more information towards the end, but by that point I was already frustrated. I think with me, if you are going to introduce a world that I am unaware of, or people or creatures that I have never heard of, I really need an explanation of how they came to be or how this came to be. That way I can really get a grasp on the situation, location, time frame, etc. in the world that I have been thrust into. But I never got that. It just was and you just had to follow along with the fast paced, action filled story that was 'Elemental'.

Don't get me wrong, because this by all means is a lovely story and Ms. White's writing style is amazing. I just felt like there was a lot of explanation missing.

Her character's (Ella, Cailen, Malik, Meir) they were all lovely and I would follow along with their heartfelt stories. I connected with her characters very much and I genuinely enjoyed reading about them. However, the funny thing was, was that I wasn't as connected with Ella (the main character) in the story. And I think it was because there wasn't enough (once again, explanation) of how she came to be. How she came to be locked up, what happened, who here parents (King and Queen) were, friends, etc. That just let her stayed locked up for 10 YEARS, until Cailen had finished his training and was able to search for his bonded mate. Oh, wait a minute. BONDED MATE! I would have been tearing down universe's if my Boned Mate (like Soul Mate) had been taking away from me, not waited 10 years for him/her to rot in a prison before I found him/her. There was more explaining of the life's of the 3 male characters then there was of the main. And another thing was that Ella randomly killed a shop keeper. I understand if a character has to die in a book (it happens) but just a random killing that doesn't really serve any purpose in the book (at least none that I could find) is just a act of violence that doesn't need to take place.

However, at the end of this book, after I had sat down and really thought about it, and thought about it some more. I came to this conclusion. For a debut novel, this was all together not a bad start for what seems like will be a lovely writing career for Ms. White. While I did not like the fact that she didn't give me enough explanation, her writing style was simply lovely and something I really enjoyed reading. This is a fast read, for anyone out there interesting in picking it up and all together, while it may be quite confusing at first and may lack explanation. It is also action packed, fast paced, romantic and captivating. & a series, which is always a bonus for me (since I don't typically read a book unless it's a series). I look forward to reading 'Fae' the next book in this series, due out sometime next year. Enjoy reading.

From what I'm reading in this review and from the synopsis of the book, I don't think it's quite a book for me..
Lovely review though!!

@Ella: But you have the same name as the heroine in the story... LOL. It was a good book, just needed some more 'explanation' in it. =D

I was drawn to your review because I've been wanting to read Elemental. Great review and thank you for being honest. At least now I'm not expecting too much of it to not be disappointed later :)

@Rachel: It is a good debut novel and all together is not horrible. But it isn't the greatest book I have ever read either. I sill really look forward to reading more from Emily White. I hope that you enjoy it when you are able to read it. And not a problem. That is one of the reasons that I do my blog. To give people my open and honest opinion about all the books that I read. =D