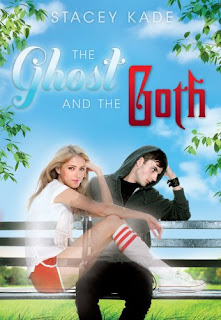 Alona Dare - Senior in high school, co-captain of the cheerleading squad, Homecoming Queen three years in a row, voted most likely to marry a movie star… and newly dead.

Will Killian - Senior in high school, outcast, dubbed “Will Kill” by the popular crowd for the unearthly aura around him, voted most likely to rob a bank… and a ghost-talker.

Opening Sentence: It was easy enough to sneak out of school.

'The Ghost and the Goth' by Stacey Kade was a HUGE surprise for me. I must admit that I was not expecting much from this book and actually didn't think that I was going to enjoy it at all. Goes to show you how much I know. Because I absolutely adored this book, from beginning to end.

Besides trying to hide the cover from my cousin (who is deadly scared of ghosts) there wasn't a moment that I wanted to put this book down. Except when I was forced to work =(. Alona and Will both had such strong, clear voices and were both such leading characters. I can't think of a single time that I was annoyed with either one of them. They were both flawed in their own ways but together they were better then by themselves. That is when they were able to get along or even willing to listen to one another. They both came from such different backgrounds that at first it was definitely hard to see how they would ever be able to figure out how to work nicely together. But it was a great journey seeing them finally being able to look behind the image and into who the person really was.

I typically don't like the stereotypical 'cheerleader' character, but Alona was far from that. She was actually a rather intelligent and quick-witted character to read about. I found her to be so much more then one would expect. She was what she was (while she was alive) because she was afraid to let anyone see how really flawed and not perfect her personal life really was. And that is just a human trait that I couldn't not love her.

And Will was just the opposite of Alona. Not that he wasn't flawed, because by all means he was as well. But it was for completely different reasons. He didn't know how to comes to terms with his dad's death and what he did, leaving his mother and him alone. And he couldn't figure out how to accept his gift without hurting people (or so he thought). But with Alona's help he was able to figure out that it was a gift, not a curse. And with Will's help Alona was able to figure out that sometimes allowing people to see that your not perfect isn't a bad thing, because nobody is.

This was a quick read and I finished it within a day. But I am so absolutely in love with this series. I have been so lucky recently with getting to read such good books. I have already went out and bought 'Queen of the Dead' book 2 in this beautiful and sweet series. Can't wait to be able to read it and the cover is just as beautiful as 'The Ghost and the Goth' book cover. =D

@Fara: I would definitely suggest you get a copy. Or if you win my newest giveaway you can select 'The Ghost and the Goth' as the book you get from me. =D

does anyone know who's the guy on the cover of this book? :)

@Heidi: I have no clue. Sorry.