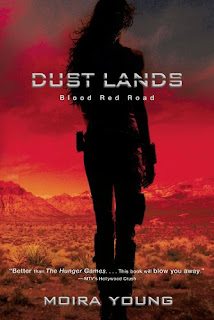 Saba's world is shattered when her twin brother, Lugh, is captured by four cloaked horsemen. Determined to rescue him, Saba sets off into the lawless, wasted landscape left behind by the Wreckers. It's a brutal world where Saba discovers some surprising things about herself: She's a fierce fighter, a cunning opponent, and above all, an unbeatable survivor. Teamed up with a handsome daredevil named Jack and a gang of girl warriors called the Free Hawks, Saba is off to save her brother - and maybe her whole life.

Wow, where do I even start with this book. 'Blood Red Road' by Moira Young was completely different then what I had expected and so different then anything I have read before.

Ms. Young's writing style totally confused me for about a third of this book until I was able to get accustomed to it. The sentences don't go in the formation that I am used to like for example:

What's the matter? says Ike. You got a face on you like a slapped polecat.
I don't like people makin fun of me, I says.

Where are the parentheses? This may only be an issue to me, but it was so hard for me to get into the book because of how conversations and language was set up in this book. It just confused me. I didn't understand at first that there were conversations going on. And another thing that really put me off at first about this one was that there were absolutely NO chapters. No Chapters? No, there where like 9 parts that the book was split up into, but that was about it. I know for myself that I base my progress in a book by the amount of its chapters I have read. Weird, but just how I read books. I need chapters. I love chapters. And this book had none.

However, after I was able to get adjusted to these two issues with this book, I was actually finding myself enjoying the read. A lot of the time it felt like I was reading a western even though I know this is supposed to be taking place in a dystopian based America (sorta in the future). But it also hard to put my thumb on exactly what the setting was for this book, because it's not really explained how the world has become the way it has or how this dystopian world came to be. Which is something I found myself wishing had been explained. Because when it's not explained it just makes me feel like the author themselves doesn't even know who the world they are writing about came to be. And that's not a overall good thing for the author, at least in my opinion.

Overall, the story was okay. The characters were unique and definitely themselves. I did however find myself annoyed with some of the characters and situations sometimes.

The front of this book has a quote by MTV's Hollywood Crush that states, "Better than The Hunger Games.... This book will blow you away." Please excuse me while I roll my eyes. I mean no disrespect, but this book was not better then The Hunger Games and I most definitely did not find myself blown away. While the ending of this story definitely saved it for me and made me want to read the next book in the series to see what the heck happens, overall it was just okay for me.