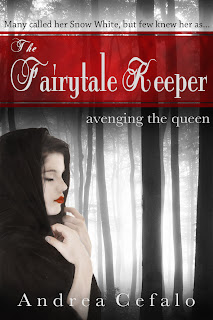 Many called her Snow White, but few knew her as the Fairytale Keeper...

Snow White was a pet name her mother had given her, but her mother's dead now. Adelaide hates that name anyway. A rampant fever claimed Adelaide's mother just like a thousand others in Cologne where the people die without Last Rites and the dead are dumped in a large pit outside of the city walls. Adelaide's father is determined to obtain a funeral for his wife, but that requires bribing the parish priest, Father Soren. When Soren commits an unforgivable atrocity, he pushes Adelaide to her breaking point, but if she seeks justice against the cruel priest, she risks sacrificing everything: her father, her friends, her first love, and maybe even her life.

Opening Sentence: Once upon a time in the middle of winter, when the flakes of snow were falling like feathers from the sky, a queen sat at a window sewing, and the frame of the window was made of black ebony.

To be honest, I am a bit confused with this book. Maybe it has just been way to long since I have read a historical book. Not that this book wasn't right on with it's history. I couldn't find a fault with that, it was maybe just the old time ways of life. You know things like.... Woman should be seen but not heard, you obey your father unless you want to be brutally beat, no sex before marriage.... you know things like that. I just kept waiting for the action to happen or even for it to be mentioned how a Queen was going to be avenged. After all, that is the title of the book. I completely understand how the fairytale's come in, they are easy for you to see, but where exactly is a Queen wronged in this book, that she needs to be avenged? Where is there even a Queen mentioned in this book? This is maybe where I am confused. Because the title of the book, doesn't fit the story AT ALL. Well at least not the 'Avenging the Queen' part.

Don't get me wrong. For the most part I enjoyed this story and it was an interesting tale. It kept me entertained and interested in what was going to happen next. But the whole time I was waiting for a witch to pop out and cast a curse, or for a vampire to appear and suck a neck, or an angel to come flying in on glittery white wings and redeem a soul. This was a pure historical book and it got a little boring because of that. The story within the history however, was interesting.

Adelaide is a strong character with a great sense of who she is and what she wants. She loves her father even after he so blatantly disrespects his just dead wife and she adores the guy who loves her back, Ivo. If you love historical books with a strong female character and fairytale re-tellings, this is definitely the book for you.