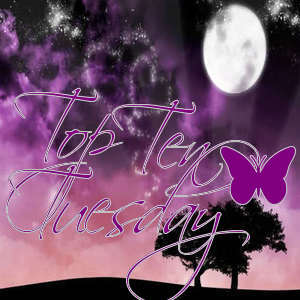 1. Rose Hathaway & Dimitri Belikov (from The Vampire Academy Series):
Do I really even need to explain this one? Rose is the badest bad-ass for a heroine in YA paranormal. I absolutely adore her. And Dimitri while being extremely traditional in a lot of ways (and pretty dang strict) he still allows her to be herself, but is always there to keep her in line while supporting her at the same time. I ADORE this couple.

2. Sydney Sage & Adrian Ivashkov (from The Bloodlines Series & VA):
Okay.... So admittedly they are not technically a couple. YET! I mean, nothing official happened between them in Bloodlines, the spin off series of the VA series. But come on.... There was total chemistry between these two and it was so adorable to read about. I will admit that I was not a fan of Adrian's until I read Bloodlines, but then again that could of been completely biased seeing how much I love Dimitri. But Rose would of never truly made him happy any ways, not when her heart fully belonged to Dimitri.

3. Hermione Granger & Ronald Weasley (from the HP Series):
Oh, come on now. You all know you absolutely adore this couple as well. It grew up with these characters and witnessed every stage of their flirtations. There is nothing I can't love about both of these characters and they are absolutely perfect together. One of the greatest couples in YA ever.

4. Clara Gardner & Tucker Avery (from the Unearthly Series):
Clara risked her destiny for Tucker and Tucker loved her regardless, even when he knew she was something more then just human. That kind of unselfish and undying love is something hard to come by. And all the bickering between these two before they found each other was just so adorable. Loved every stage of their romance.

5. MacKayla Lane & Jericho Barrons (from the Fever Series):
Okay, while I will admit that I have only read the first book in this series so far and not enough has happened between them to really call them a couple yet. I like the idea of them as one. They are great together even if they can't see it yet, themselves.

6. Kylie Galen & Lucas (from the Shadow Falls Series):
Okay, these two share a past together. That is something you can't beat. And Lucas is just a sexy ass werewolf, no offense Derek but you can't compete with that. They are sweet and gentle with one another and it's just a coupling that I am totally rooting for.

7. Sophie Mercer & Cal (from the Hex Hall Series):
I will admit that I was totally an Archer fan until Demon Glass (the second book in the series) came out. And then I got to really see Sophie and Cal together and now I am totally rooting for Sophie to get over Archer and go with Cal. I guess I will just have to wait and see.

8. Isabella Swan & Edward Mason-Cullen (from the Twilight Series):
Okay everyone, you know I had to add them to my favorite couples. I am a huge Twilight fan after all and it is the series that originally got me into reading YA books. So there was no way that I wasn't not going to put them on this list. While now a days I can totally see the holes in their relationship all I have to say to that is what relationship doesn't have bumps along the path. It's how you get over them that makes a relationship strong.

9. Evie & Lend (from the Paranormalcy Series):
This is just a sweet teenage love story. With a little bit of paranormal thrown in of course. But I love how they are around one another. It's the best.

10. Grace & Sam (from the Wolves of Mercy Falls Series):
Theirs is the absolutely sweetest and most endearing love stories I have ever read about in a YA series. I absolutely ABSOLUTELY love them together as a couple. There is no other YA couple better suited for one another then Grace & Sam.


Who are you top ten favorite YA couples?

Hermione and Ron forever! I was rooting for them from the moment they first met on the Hogwarts express.

I love Sydney and Adrian! :D I feel that they're a much better couple than Adrian and Rose, because you know Rose only has her eyes on Dimitri! xD

@Keri: Heck yea. They are just the cutest thing together. And seeing them over like a 7 year span of time fall for one another. That's real love there. =D

@Kat: Oh heck yea. I have already pre-ordered my copy of 'The Golden Lily' that comes out next month. OHHHH!!!! I can't wait to start it and see where Richelle Mead takes this series and especially Sydney and Adrian.