Today I bring you and Interview and Giveaway with Monique Domovitch. She's the author of 'Scorpio Rising' and 'The Sting of The Scorpio'. 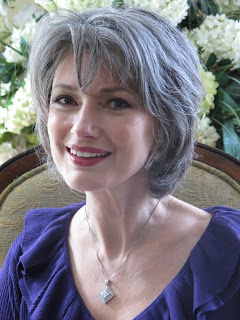 Monique Domovitch was born the first in a family of ten children in a small town in Northern Ontario, and maintains to this day that she was not harmed by the experience.

She attended The Sacred Heart Convent, a boarding school where she learned to keep her hands folded neatly in her lap and to smile vaguely when people use profane language around her.
Her first job was as a fashion model, and she is credited with the invention of the famous pouty pose that is now used by top models everywhere.

She has turned thirty nine again this year and pledges to do it again next year.

Just like everybody else in the world, she is working on a new novel, this one, her fourth.

1. What inspired you to write 'Scorpio Rising' and it's sequel 'The Sting of The Scorpio'?
I was intrigued by the world of architecture and real estate and also had a fascination for the art world especially the artists who became famous working in Montmartre and decided, rather than write two novels, it might be interesting to combine both worlds and see what I could come up with.

2. What was the hardest part to write?
The hardest part to write was that of Brigitte. Because she was from an earlier generation, she was so much more submissive and accepting then women are today. She was also born in France where it is so much more accepted for a man to have a mistress. I constantly had to refrain from giving her more backbone. But that would have weakened the story.

3. What character as the funniest to write?
The funniest was Natalia, the aging, overweight movie star. She was a hoot. Developing her character was such fun. I gave her a fascinating story and dressed her in flamboyant clothes. She was the kind of older lady I think many of us would just love to be - independent, headstrong and interesting.

4. What would you like your readers to take out of your book?
All I want is for my readers to be entertained. I want them to read the book from cover to cover and be left wanting more. It seems that I'm successful at it. I can't tell you how many emails I get from readers telling me they had to stay up all night because they couldn't put it down. That is the biggest compliment. On a more serious note, if there is a lesson it would to be care what we value. In the end it is rarely what we covet that will make us happy.

And now for the Giveaway. If you go to Ms. Domovitch's website below. You can enter the Rafflecopter for some AMAZING prizes. Don't miss out. =D

Also, if you visit Amazon this week, Ms. Domovitch's books will only be .99 cents. Don't miss out on these spectacular opportunities.