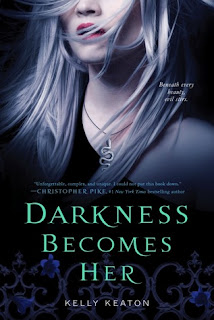 A CURSE BEYOND HER
DARKEST FEARS

Ari can't help feeling lost and alone. With teal eyes and freakish silver hair that can't be changed or destroyed, Ari has always stood out. And after growing up in foster care, she longs for some understanding of where she came from and who she is.

Her search for answers uncovers a message from her long-dead mother: Run. Ari can sense that someone, or something, is getting too close. But it's impossible to protect herself when she doesn't know what she's running from or why she is being pursued.

She knows only one thing: She must return to her birthplace of New 2, the lush, rebuilt city of New Orleans. Upon arriving, she discovers that New 2 is very... different. Here, Ari is seemingly normal. But every creature she encounters, no matter how deadly or horrifying, is afraid of her.

Ari won't stop until she knows why. But some truths are too haunting, too terrifying, to ever be revealed.

Opening Sentence: Under the cafeteria table, my right knee bounced like a jackhammer possessed.

I glanced up into round black eyes, ringed in yellow, but in some small part I saw humanity there. Sadness. It blinked. "Made," it said quietly, almost ashamed.

'Darkness Becomes Her' by Kelly Keaton was a wonderfully delightful read that left me panting for more.

This book is action from practically the very first page and doesn't stop until the last word has had it's say. It wraps you up within it's reality and you finally see the world that you didn't know exists until then. I never wanted to put this book down except when I absolutely had no other choice (work or sleeping).

Ari was everything that I look for in a heroine. Except for one or two moments at the beginning of the book when she got on my nerves she finally came into herself and kicked ass. She didn't back down and after excepting that her family line was cursed took all the steps that she could to free herself.

She even took a guardian sent to kill her head on and came out victorious, not once but twice. And then even managed to rescue a whole slew of otherworldly creatures who would later come to her rescue as well.

Sebastian was also a wonderfully delightful character and added a whole different flavor to the atmosphere. While he was dark and mysterious at first, he slowly warms up to Ari and by the end of it all he genuinely wants to help Ari out as much as he can. I love the guys who have a rough exterior but still have a soft heart deep down. And him and Ari were absolutely adorable together. While I wasn't to big on the almost instant love that occurred between them, I still loved almost every scene between them.

I also enjoyed how Ms. Keaton weaved in the development of Sebastian's character and how it is his family and the other families came to be who they were. It seemed flawless that they were special. And the fact that I didn't see who coming who Ari really was and who had cursed her was brilliant. I had never read a book before that had supernaturals and gods. WHAT! That's awesomeness.

While this was a quick fast read, I thoroughly enjoyed every little bit of it and highly look forward to getting 'A Beautiful Evil' the next book in the series.