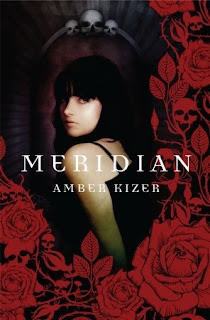 HALF HUMAN, HALF ANGEL,
MERIDIAN SOZU HAS A DARK RESPONSIBILITY.

Meridian has always been an outcast. It seems that wherever she goes, death and grief follow. On her sixteenth birthday, a car crashes in front of her family's house - and though she's untouched, Meridian's body explodes in pain.

Before she can fully recover, Meridian is told that she's a danger to her family and is hustled off to her great-aunt's house in Revelation, Colorado. There she learns the secret her parents have been hiding for her entire life: Meridian is a Fenestra, the half-angel, half-human link between the living and the dead.

It's crucial that Meridian learn how to transition human souls to the afterlife - how to help people die. Only then can she help preserve the balance between good and evil on earth. But before she can do that, Meridian must come to terms with her ability, outsmart the charismatic preacher who's taken over Revelation, and maybe - if she can accept her sworn protector, Tens, for who he is - fall in love. Meridian and Tens face great danger from the Aternocti, a band of dark forces who capture vulnerable souls on the brink of death and cause chaos. But together, they have the power to outsmart evil.

Opening Sentence: The first creatures to seek me were the insects; my parents cleaned the bassinet free of dead ants the morning after they brought me home from the hospital.

His hands - how was it possible to be captivated by something I saw everyday? I'd never paid attention to hands before, but his drew my eyes. I wondered what they'd feel like holding me, if he'd be as gentle with me as he was with Custos.

"Everything changes, Meridian. Everything is temporary, except the sky. When you find yourself caught up in the horrors or the heroes of a lifetime, look up. Don't look down. That which is beneath our feet is liquid, but the sky, the sky is solid, constant, ever ready and ever hopeful that the sun will rise in the morning and the moon will rise at night. They don't really set, you know. They're always rising, just rising for someone else."

If you live long enough, you learn time is an illusion. The clocks and watches worshipped by those who deny the inevitable. There is power in acknowledging we are not the ones in control.

'Meridian' by Amber Kizer blew me away. I will be the first to admit that I did not expect to enjoy this read as much as I did. It was gritty, it was unexpected and it was shockingly lovely in all the right places.

Meridian Sozu was a great heroine for this book. She fit the part perfectly. She was different, used to things dying around her of which made her an outcast at her H.S. However, when a car crashes in front of her house and she is racked by an extreme pain, her whole world changes. Quite literally. Her dad takes her and put her on a bus to her great-aunt's house (a person whom she has never met) and then her parents and little brother disappear. Leaving her with only a note for explanation.

When she gets to her aunt's house, she finds out what has made her so different her entire life. And that it is something that also makes her extremely special. She is one of the few links between the mortal world and the "other" realm. A being that helps souls transition to their own personal heavens. But she must be protected at all costs, because there are bad beings out there (the one's that take souls to the not so pleasant other realm) who want to see her dead.

With only four main characters, this book was intimate without being invasive and you really get to know all the characters. While I wasn't a fan of the almost instant love between Meridian and Tens (after all he pushed her away for most of this book), I still enjoyed each character and what they brought to the story. While the storyline started to get a little slow and repetitive towards the middle it made up for it at the end with a twist that I didn't see coming. I look forward to reading 'Wildcat Fireflies' the next book in the series and seeing where Ms. Kizer takes us. Because I have absolutely no clue. I can't wait to get my hands on it. Loved this book.

Great Review! I have been wanting to read this one for a while but, I just haven't gotten to it yet, after reading your review I know I should really move this one up my TBR list Thanks so much and Have a great day!

@Kristin: That's what I am here for. I love it when I actually get comments on my book reviews. It doesn't happen as much as I would like seeing how this is mainly a book review blog. But I really enjoyed this book. The middle is rather slow and repetitive I will admit, but like I said the ending in my opinion makes up for it. =D