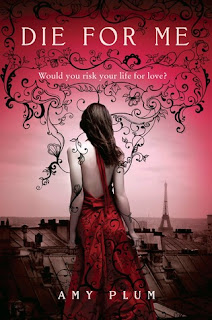 MY LIFE HAD ALWAYS
BEEN BLISSFULLY,
WONDERFULLY NORMAL.
BUT IT ONLY TOOK
ONE MOMENT TO CHANGE
EVERYTHING.

Suddenly, my sister, Georgia, and I were orphans. We put our lives into storage and moved to Paris to live with our grandparents. And I knew my shattered heart, my shattered life, would never feel normal again. Then I met Vincent.

Mysterious, sexy, and unnervingly charming, Vincent Delacroix appeared out of nowhere and swept me off my feet. Just like that, I was in danger of losing my heart all over again. But I was ready to let it happen.

Of course, nothing is ever that easy. Because Vincent is no normal human. He has a terrifying destiny, one that puts his life at risk every day. He also has enemies... immortal, murderous enemies who are determined to destroy him and all of his kind.

While I'm fighting to piece together the remnants of my life, can I risk putting my heart - as well as my life and my family's - in jeopardy for a chance at love?

Opening Sentence: The first time I had seen the statue in the fountain, I had no idea what Vincent was.

Die for Me by Amy Plum was an enjoyable read. I wasn't really captured by the book from the very beginning though. Actually, the beginning of this book really annoyed me. While, I still have both of my parents and I can't possibly understand the kind of pain that both Kate and Georgia were going through, Kate's constant downer attitude really got to me. It was a downer for the main character to be in this depressed state of mind from the very beginning of the book. However, it slowly started to get better as Kate started to re-enter the world of the "living".

Soon after this happens is when the book starts to really pick up for me and Vincent is introduced. And the element of mystery as well. It's like, what the heck is going on here?

It was refreshing to read the steps that Kate took to figure out what was really going on with Vincent, instead of him just spilling the beans to her, like what happens in a lot of paranormal books. And to see the struggle Kate went through to come to terms with what Vincent was and if she could really love somebody like him. The love between them was sweet and genuine and you could see how it build up to be strong. And the times that they weren't together and were struggling with their own personal demons you really got to understand who they were as characters and not just who they were together.

The direction that Ms. Plum takes on the story of revenants is new and refreshing. It was unlike any else that I have read previously and I really enjoyed the aspect of people being "blessed" once they have sacrificed their lives for someone else. Or of them being "cursed" once they have betrayed other's to death.

The dynamic between all the characters in this book were really thought and and greatly executed. Each character really had their own distinct voice and attitudes and were different from one another. And they all worked really well with one another. However, there were parts of the book that were way to predictable for me to figure out. Like who Georgia's "friends" really were and what their plans were. It was easy to figure out the trap that was being set up and how they had figured out who Kate was to Vincent. The only thing that wasn't so obvious was how Kate was going to end up prevailing over the revenant trying to kill Vincent. So when it was finally revealed it was really interesting to read.

Ms. Plum wrapped this first book up really nicely and left just enough not explained to make me really want to read the next book in the series. There is a part of me that feels like Kate's parents really aren't "dead" (of course that could just be my over active imagination). And that there is something special about Kate that has yet to be revealed. Die for Me was a great start to a new series and I really look forward to reading Until I Die the next book in this series.