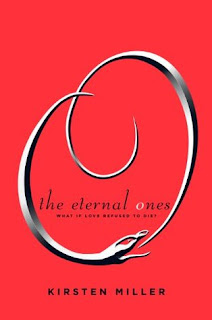 Haven Moore has always lived in the tiny town of Snope City, Tennessee. But for as long as she can remember, Haven has experienced visions of a past life as a girl named Constance, whose love for a boy called Ethan ended in a fiery tragedy.

One day, the sight of notorious playboy Iain Morrow on television brings Haven to her knees. Haven flees to New York City to find Iain and there, she is swept up in an epic love affair that feels both deeply fated and terribly dangerous. Is Iain her beloved Ethan? Or is he her murderer in a past life? Haven asks the members of the powerful and mysterious Ouroboros Society to help her unlock the mysteries of reincarnation and discover the secrets hidden in her past lives, and loves, before all is lost and the cycle begins again. But what is the Ouroboros Society? And how can Haven know who to trust?

Opening Sentence: Haven was back.

Where to start with this review? To be completely honest I enjoyed The Eternal Ones by by Kirsten Miller a lot more then I thought I was going to. There were good and bad about this series, that really kept me hooked until the very last page.

The Eternal Ones has the reader starting out in a small town in Tennessee. And we really get to know our main female character. We learn who she is as a person, who her family is and how the life and people she grew up into have really affected who she is as a person. We know from the very beginning that she has always know she has lived before, she knows practically everything about her past life and that that life still feels just as strong to her as the life that she currently lives. However, being raised in a very strict religious family this is no looked upon very kindly. Especially when a little girl is remembering the adult relationship she had with her love in a past life and wants to find him to continue that love.

There are people in her life that fall into three different categories. There are the ones that believe her, there are the ones who strongly disbelieve her (this is the strongest group) and there is the one person who falls somewhere in the middle. But being raised by a grandmother who is extremely religious, doesn't help our young heroine out. No, because she has been raised her entire life to believe that she has a demon dwelling within her and that she is a danger to everyone she loves.

Yet she still remains strong in her believe that there is someone out there waiting for her to find him. And that they have loved each other in lives before and that they are meant to love each other now. This is what carries the book for the first 151 pages (yea, our main guy character doesn't even show up until like page 160...). Yet despite the majority of the beginning of the book being about nothing but our heroine. I was still really looking forward to seeing what else this book held in store for me.

Our main guy enters the picture:

And when Haven and Iain (our two main characters) find one another, after about 160 pages, we are swept away on a grant romance. I loved this part, it was sweet and romantic. But this part of the book is very shortly lived.
And this is where I started to have some issues with the book.

Up until this book, Haven had been a completely strong character (well for the most part at least) and she had been strong in her convictions that she needed to find the guy that she knew she loved. Yet when she finally finds him, she turns into a completely different character. Or at least that is the way I see it. Instead of really focusing on the real facts, and trusting her instincts. She instantly lets herself start to believe the very worst in Iain. And starts to see him as a killer. I was rolling my eyes the entire time this was going on. Which was for the main majority of the book.

I mean come on. You love this guy and have dedicated your entire life, let everything back home think you were possessed by a demon just so you could find him and then when you do you believe him to be a killer and don't trust him. I can see why their romance always ended in ruin, because she never had the strength or trust to believe in the one guy who worshipped the very ground she walked on.

I mean, from an outside perspective (namely me), it was WAY to obvious to see what was really going on. And that is something else that annoyed me, besides Haven's instant disbelieve in Iain. The fact that she couldn't even see what was right in front of her face. You could tell who was good and who was bad from the very beginning. Who was on her side and who was just playing her. Yet she just KNEW she had all the facts straight and correct. I mean why wouldn't the killer be the very person who has loved you for centuries and done everything in his power to protect you. I mean that makes complete and total sense right?

However, besides this overly annoying part of the book, everything else was amazing. It was a strongly writ and original book. And it really took you on an adventure and made you think about reincarnation and what it really meant if you would be able to remember your pasts life. Personally, I think it would be really hard for you to remember your past life. It would cause all kinds of problems for your current life, just like it did for Haven and Iain, but at the same time it brought to people who truly loved each other back together again.

This was a very strong and griping book, that really made me think about what destiny meant and how hard it could be to follow our hearts. But showed me that in the long run, following our hearts was the only way to find our true destiny.

Overall, this was a really good book that I enjoyed a lot more then I originally thought I was going to. However, I do strongly wish that Ms. Miller would have made this a stand alone book, because I really don't see the need for sequels. Especially since I have heard from other reviewers that the next book in the series is a complete let down, I will still forge ahead and see what else Haven and Iain have in store for me.