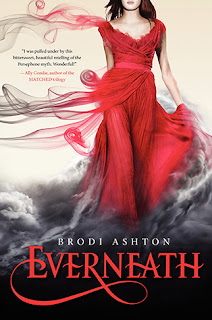 Publisher: Harpers Collin
Release Date: January 24, 2012
Page Count: 370
Chapter Count: 33
Named Chapters: No
Format: Hardback
Source: Library
Tag Line: None
Buy It: Amazon / B&N / The Book Depository
Last spring, Nikki Beckett vanished, sucked into an underworld known as the Everneath. Now she's returned--to her old life, her family, her boyfriend - before she's banished back to the underworld . . . this time forever. She has six months before the Everneath comes to claim her, six months for good-byes she can't find the words for, six months to find redemption, if it exists.

Nikki longs to spend these precious months forgetting the Everneath and trying to reconnect with her boyfriend, Jack, the person most devastated by her disappearance - and the one person she loves more than anything. But there's just one problem: Cole, the smoldering immortal who enticed her to the Everneath in the first place, has followed Nikki home. Cole wants to take over the throne in the underworld and is convinced Nikki is the key to making it happen. And he'll do whatever it takes to bring her back, this time as his queen.

As Nikki's time on the Surface draws to a close and her relationships begin slipping from her grasp, she is forced to make the hardest decision of her life: find a way to cheat fate and remain on the Surface with Jack or return to the Everneath and become Cole's queen.

Opening Sentence: I was picturing his face - a boy with floppy brown hair and brown eyes - when the Feed ended.

At first it was a hard book for me to get into. Not because I didn't like the story line or characters. These were all very interesting indeed. It was mainly because when Nikki "Becks" (our heroine) first comes back from the Everneath (the realm of the everliving -a.k.a. the Underworld-) She is just a shell of the person who she used to be. She has no emotions of her own, because she was sucked dry of them. And all she is being driven by is the fact that she wants to be able to say good-bye to the people she loved in her former life, before she is taken back to the Everneath, for good this time.

We are taken on an emotional journey alongside Becks as she relearns what it means to be human again. What it means to hope, to dream, to love again. Every emotion and feeling that we take for granted she gets to find them all over again and learns how to really cherish them for how precious they are.

You get to find out what the people in her life really mean to her and what she means to them in return.

There were moments in this book that I had to sit it aside and just cry for the life that she lost and her desperate hope to try and get it back. She made one silly rash decision that changed her life forever and she is trying to make up for it. Find redemption for herself that she is not even sure she deserves but still desperately hopes for. She just wants the people she loves to forgive her, but to also learn how to continue being happy after she must leave for the final time. You get a look into how it is for the people left behind after a love one passes and how they devastated they are, but how they try to live on and still make a life for themselves while never truly forgetting the one they love.

Everneath was a truly gripping tale about life and death. About not rushing into decisions and taking your time to way the pros and cons.

I found Jack's love for Becks to be truly touching. He continued to love her even when he started to hate her. And even when he tried to move on, she still remained in his heart. And while he knew it would take a lot to fix their relationship, he never once stopped believing in her, even when she stopped believing in both of them. She was the girl he had loved for so long and he wasn't going to give her up without a fight. We get to see them fall in love with each other all over again, while being given glimpses of what originally had them falling in love with one another and their life together before the Everneath.

I loved everything about this story. Heck I even loved the bad guy of the story. Because in the grand scheme of things, he wasn't truly bad. Just misguided in a lot of ways. While I originally H.A.T.E.D (with very capital letters) the ending, after thinking about it for a few days I understand why it needed to happen. And how perfectly it set up for the next book in this series. A book that I cannot wait to get my hands on. I need some more Jack.