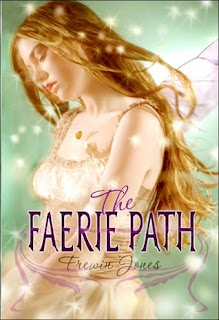 
Anita was living an ordinary life.
Until an elegant stranger pulled her
into another world.

Swept away into a court of magic and beauty, she discovers she is Tania, the lost princess of Faerie: the youngest daughter of Oberon and Titania. Since Tania's mysterious disappearance on the eve of her wedding five hundred years before, Faerie has been sunk in darkness and gloom. The courtly Lord Gabriel Drake, who Tania was once to marry, has found her and brought her back.

With Tania's return, Faerie comes alive again as a land of winged children, glittering balls, and fantastic delights. But Tania can't forget Anita's world, or the boy she loved there.

Torn between two loves and between two worlds, Tania slowly comes to discover why she disappeared so long ago. She possesses a singular magical ability and she must use it to stop a sinister plan that threatens the entire world of Faerie.

Opening Sentence: Anita Palmer stepped out of the shower and reached for the bath towel.

The Faerie Path by Frewin Jones was a nice, easy read. It was a refreshing book after having read so many deep, dark, hard world, books before it. This is the kind of book that I would think of if I was told to think of a summer read. It wasn't something to take to seriously but still enjoyable to read.

While I can't say I necessary loved the world that Frewin Jones created (because for most of the book there wasn't a lot that captured my attention) as it got closer to the end of it, the book definitely started to get a lot more interesting. I like the characters of Edric and Eden the most, they weren't in most of the book, so that was definitely a downer. Anita/Tania (because they do use both names to refer to this one character, which can get confusing sometimes) was an okay character, I don't know if she was necessarily the strongest character to carry a book series all by herself.

Things that I enjoyed:

The light hearted feel. The different world of faerie that was created by Frewin Jones. King Oberon and Queen Titania of the faeries actually being in a happy marriage (never heard of that before). Sibling rivalry (kinda taken to the extreme in this book, but not unexpected). A cute romance if not a little cheesy and over-done in books. A little bit more history on faeries and their world matching ours where they come close to touching.

Things that annoyed me:

The plot line was way to predictable. Anita/Tania had absolutely no faith in the person that she was supposed to be so in love with. Main character was a little bit of a cry baby. Fact that I connected more with secondary characters then I did the leading lady. Trying to figure out how the heck this series still has 5 more books to go (what else can Frewin Jones really write about?)

Overall, this was an okay book. While I didn't absolutely love it, I didn't really dislike it either. Like I have said, it's a nice easy read if your looking for something that doesn't take itself to seriously. If you need a break from those serious books, you should definitely pick this one up.

Oh... And something that I found absolutely funny. Maybe it's just me. But, you can all see how GIRLY this book cover (and every cover for this series) is.... And in all reality it will definitely appeal more to girls then it will boys... BUT!! The author is a guy.... LOL! Gotta love it. =D