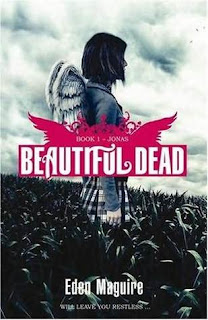 
Not alive. Not dead.
Somewhere in between lie
the Beautiful Dead.

Something strange is happening in Ellerton High. Jonas, Arizona, Summer, Phoenix. All dead within a year.

Jonas Jonson is the first to die, in a motorcycle accident. But there are many unanswered questions, and the three deaths that follow are equally mysterious.

Grief-stricken Darina can't escape her heartache or visions of her dead boyfriend, Phoenix, and the others who died. And all the while, the sound of beating wings echoes inside her head...

Are the visions real? Or do the Beautiful Dead only exist in Darina's traumatized imagination?

Opening Sentence: The first thing I heard was a door banging in the wind.

Jonas by Eden Maguire was an interesting book to read. Half the time I didn't know whether I should believe what I was reading: Do I believe in the Beautiful Dead? Or are they really just figments of a delusional mind?

Right from the very beginning of this book it is utterly heartbreaking. We meet Darina, who is a young girl absolutely heartbroken over the death of her boyfriend. Who she loved very much. People are trying to console her, but she is having none of it. Which can be understood. I mean after all the town is already in a state of shock because the death of Darina's boyfriend, Phoenix, marks the 4th death of a teenager in just under a year. What the hell is going on here? How is a small town, all of a sudden being rocked to it very core by the death of it's young ones?

From early on Darina comes to find out about the Beautiful Dead, souls in limbo who are trying to come to terms with how they died? And you guessed it, all 4 teenagers are among them. After a series of a situations, Darina is finally brought into their group, where she wants to stay by Phoenix's side. However she is given a mission, a mission she doesn't have a lot of time to solve. A week exactly. She must find out the mysterious behind Jonas' (the first teenager to die) death. Because something is not adding up correctly. But how can one young girl, solve a death that even the police thought was a cut and dry case? And how is she supposed to do it in only a week?

This book kept me up late into the night, captivated by it's story. The very core of this book is about how one goes on living after losing someone they love very much. What is it that keeps up living even when we don't want to any more? Do we live for that person we lost? Knowing that one day we will be reunited with them and we need a ton of stories to tell them? Or do we just give up and not care any more? What truly makes life worth living when we see it as colorless without that person in our lives any more?

There were times in this book that I absolutely cried like a baby. And I couldn't stop crying. There were such touching moments for the characters (and not just Darina) that absolutely broke my heart and made me truly feel these characters pain. Their love? Their loss. And their determination to continue living their lives in the memory of the one they had lost.

While it was slightly predictable for me to figure out what happened behind Jonas' death, it was the journey of getting to that point that made me love this book. And we are not done here. Because Darina still has 3 other cases to figure out. After all all 4 teenagers stayed in limbo, because their was something unusual about all of their deaths. And now Darina needs to solve it for all of them.

I look forward to reading the next book in this series. And seeing what happened with the next teenager. And how Darina will solve her death for her.

OO this one looks like a good read. I hadn't heard of it before so I'm glad you reviewed it since it's going on my tbr list! Great review!
-Kimbedrly @ Turning the Pages

@Miss Kimberly Stardust: At first this is a hard book to get into. Because for a while there I was like "What the heck am I reading?". But once the book really gets going, it was just SOOOO heartbreaking. Ms. Maguire did a great job of writing her characters because you can really feel for them and their pain and what they are going through. I cried so much on this book. Can't wait to read the next 3 in the series.