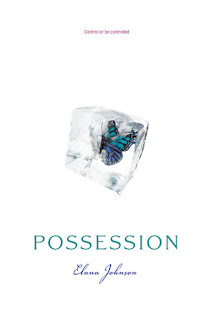 
VI KNOWS THE RULE: Girls don't walk with boys, and they never even think about kissing them. But no one makes Vi want to break the rules more than Zenn... and since the Thinkers have chosen him as Vi's future match, how much trouble can one kiss cause? The Thinkers may have brainwashed the rest of the population, but Vi is determined to think for herself.

But the Thinkers are unusually persuasive, and they're set on convincing Vi to become one of them... starting by brainwashing Zenn. Vi can't leave Zenn in the Thinkers' hands, but she's wary of joining the rebellion, especially since that means teaming up with Jag. Jag is egotistical, charismatic, and dangerous - everything Zenn's not. Vi can't quite trust Jag and can't quite resist him, but she also can't give up on Zenn.

This is a game of control or be controlled. And Vi has no choice but to play.

Possession by Elana Johnson thoroughly confused the living heck out of me. This is a dystopian book in a manner of speaking. We are still on Earth, but it is not the Earth that we know. Technology has practically taken over. There is hardly anything that Technology can't do in this book. And there are the Thinkers that control them. Humans with the ability to make you think, do, say, etc.... They can control everything about you and they do it very freely. They have taken over the populaces of Earth. They make them do what they believe is best for humanity, because in their opinion humans need to be told exactly what and how to live life. Because they are not capable of doing it properly on their own.

But then you might be asking yourself? It seems like you have the gist of the book and understand what it's about? Why are you confused then?

And that answer is a simple one. It took me the entire 405 pages of this book to figure out what the hell was going on. Ms. Johnson just dumps her readers into this world. No explanations of how it became how it is, how Earth got overrun by these "Thinkers". How humans even managed to get the abilities to control other humans with just thinking it. And it doesn't help the fact that the two main characters are the strongest Thinkers to ever be born. The heroine only has to think of something she wants and she will get it. She says to sit, you will sit. She says to pick up a gun and shot someone, you will pick up that damn gun and shot the person. And as for the hero, well.... let's just say he can sweet talk you into doing anything he wants. BUT HOW THE HECK DID THEY GET THESE ABILITIES? How did any of them get these abilities? How do we come up with the Technology where walls talk back to you and give you directions, but can also lie to you and be spies for the enemy? This is where I am confused. Because none of this is explained. We are just supposed to take it in and say, oh that's just how it is, so get used to it? NO! I need some explaining before I can get into a world that is supposed to be like mine, but isn't.

The world that Violet (our heroine) grew up in, is called The Goodgrounds. She is a goodie. Someone that follows all the rules. And there are a lot. No touching (any ANY kind). No walking, talking, or looking at the opposite sex unless your married and in private. No being outside after dark (these being only a few of the rules). And you have to plug in every night. Which is just the Thinkers sending you messages to brainwash you in your sleep. What the kind of fuc*** up world is this?

And then there are the baddies. The ones from the Badlands. The ones that don't follow all the rules. Don't have the Technology. The ones that still stay out after dark and publicly kiss the people they love. Sounds horrible right? And when Violet is banished to the Badlands for not listening to the rules, it marks the end of the world. At least in her opinion.

But then she meets Jag (our hero) right before being banished. And they form an instant bond. Yes, you all know what I'm talking about... Insta-Love. And at a CRAZY level. Not that Insta-Love wasn't already bad, it's like 2 days for these two and they already know they are each other's soul mates. And at the end of the book, one of them (not going to say which one) sacrifices themselves so that the other one can get away.... These 2 were supposed to be the strongest Thinkers ever born, nobody so far had been able to stand up to them and they were all scared of them. And then at the end of the book, it's just like wham, I beat you..... Really? It just makes it seem like Ms. Johnson didn't know where else to go so she sacrificed one of her characters for absolutely no reason.

And even at the end of this book. After all the shocking truths were revealed (which weren't so shocking to me)... I'M STILL CONFUSED! I'm not even sure if I fully understand this book. Not to mention the fact that I am thoroughly pissed off by how it ended.

Hopefully whenever I get to the next book in the series (because I always have to finish a series if I have started it), that book will explain a lot more.