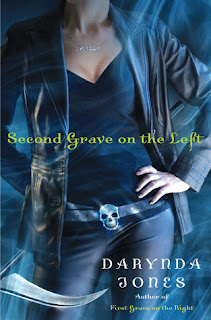 When Charley and Cookie, her best friend slash receptionist, have to track down a missing woman, the case is not quite as open and shut as they anticipate. Meanwhile, Reyes Alexander Farrow (Otherwise known as the Son of Satan. Yes. Literally.) has left his corporeal body because he's being tortured by demons who want to lure Charley closer. But Reyes can't let that happen. Because if the demons get to Charley, they'll have a portal to heaven. And if they have a portal to heaven... well, let's just say it wouldn't be pretty.

Can Charley handle hot nights with Reyes and even hotter days tracking down a missing woman? Can she keep those she loves out of harm's way? And is there enough coffee and chocolate in the world to fuel her as she does?

Darynda Jones has hit another home run with Second Grave on the Left the second book in the Charley Davidson series. I enjoyed this book just as much if not more then I did First Grave on the Right.

Second Grave on the Left starts off practically right where First Grave on the Right left us at. Only a week has gone by since Charley solved the biggest chase of her career and Reyes mysteriously disappeared from her life. And since she found out he is quite literally the son of the Devil. But what is that to a Grim Reaper?

We start off with Cookie waking Charley up in the middle of the night and forcing her to go to a cafe with her to try and find her friend, who she has recently found out has gone missing. But what should be a simple missing person's case turns into SO much more. Charley is once again being put to the test, but this time she has three (yep 3) cases to figure out all at the same time.

First she must figure out who is after Cookie's good friend. And why? What does this seemingly normal, married woman with a family have to hide from? What is it that she is so scared of? Is there someone after her? What exactly went on during H.S. that she ran away from? These are all questions that annoyed the living heck out of me until they were finally revealed. And nothing was given away, until Ms. Jones wanted it to be known.

Secondly, who is the mysterious dead guy in the trunk of Cookie's car? Is there something Cookie is hiding from Charley? Or was this ghost already there when Cookie bout the car? How can Cookie and Charley possibly find out the story behind this ghost, who refuses to even speak to Charley? But still loves to sneak in when she's taking a shower.

And finally, but certainly not least, where the heck did Reyes go? He visited Charley to let her know he was going to let his human body die, because the demons from hell had finally found him. But where could he possibly have hid from Charley that she wouldn't look from him? I will have to admit that this was the only obvious part of the book for me. Maybe it's just me, but finding out the last place a person would look, is easy for me to figure out. I mean if you just sit down and think about it. Where is the last place you would think to find someone who is hiding from you?

This book was a master piece and I absolutely loved everything about it. Maybe the only thing that I wished there was more of: Charley and Reyes love scenes. Every time it was get hot and heavy between these two, something would come up to interrupt them or stop the loving. Oh so aggravating, I wanted me some hot and heavy love between these two. It was funny to find out about Reyes fan sites though. That was a unique twist that I never even thought of.

All together I loved this book. And I can't wait to get my hands on Third Grave Dead Ahead and see where else Ms. Jones can possibly take this already amazing series.

P.S. While I love Charley I don't agree with what she did to Reyes. He has EVERY right to be pissed off at her at the end of this book.

While no real "new" (or at least permanent) characters were introduced in this book, it was really nice to see the development of the characters that have already been established.

You can obviously tell that Charley, while still being slightly confused about what her role as the Grim Reaper really means, is still getting more confidence in herself. Not that she really ever slacked in that department. She is however, coming to know that there is a LOT more to being a Grim Reaper then she ever thought possible. And she is finally seeing that she is going to have a battle ahead of her. Because things from now on out (since the Demons have seen her) are only going to get more difficult.

It was nice having more of Cookie in this book. I love how she never doubts Charley and is always there to support her friend 100%. Cookie and Charley definitely have one of the strongest friendships I have seen in a series in a while. They support each other perfectly and it is easy to see how much they care for each other.

It was nice to see that Swopes is slowly starting to back off his advances on Charley a little. It was really cute to see how much of a crush Cookie has on Swopes. I think it would be absolutely adorable to see where that "connection" could go, but I won't be holding my breathe for it. Because Ms. Jones did kind of make it seem like there could be a connection between Cookie and Ubie as well. Weird, but still kind of nice.

Reyes character developed more in this book as well. You really got to see inside him and how much of a good person he is, even though he has been locked away in prison for so long. He loves and cares about the few people he has in his life so much, and he has done whatever he can to make sure that their life's will be good. He has had to make hard choices in life, but still remains true to himself and his love for Charley.

Well... I think that's enough of me gabbing about how much I love this series. If you haven't read it yet, you definitely should give it a try. You won't regret it.