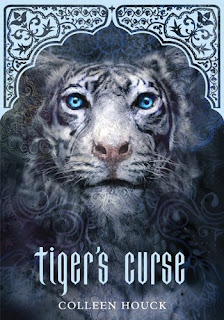 Would you risk it all to change
your destiny?

The last thing Kelsey Hayes thought she'd be doing this summer was trying to break a 300-year-old Indian curse. With a mysterious white tiger named Ren. Halfway around the world.

But that's exactly what happened.

Face-to-face with dark forces, spell-binding magic, and mystical worlds where nothing is what it seems, Kelsey risks everything to piece together an ancient prophecy that could break the curse forever

Opening Sentence: The prisoner stood with his hands tied in front of him, tired, beaten, and filthy but with a proud back befitting his royal Indian heritage.

Where to start with this one? Tiger's Curse by Colleen Houck is a book that I have wanted to read since I first heard about it on Goodreads. That was before it even came out. Now it already has 3 more books in the series out with yet another one to be published next year. Needless to say that it took me awhile to read it, even though I was excited for it from the beginning.

Did it live up to the expectation that I was hoping it would achieve? Yes and No. Overall I absolutely loved the story held within the pages of the book. It had a strong plot line, strong characters and Ms. Houck obviously knew exactly where she wanted to take this series.

I loved both the main characters (Kelsey and Ren) and even the secondary characters (Mr. Kadam and Kishan). You could tell how much research Ms. Houck put into the creation of this book as well, with all the mythological Indian Legends and the Ancient cities of their gods. She knew her stuff and she knew what she was talking about. And I came to find out that I would love to find out more about the myths of India. I know more of the myths of Greece and Rome, but had never really gotten into Indian mythology. I'll have to read more about it. It's really interesting stuff. And have I mentioned yet how much ACTION goes on in this book. Practically from the point where Kelsey is told she needs to brake and ancient curse to the end of the story, it is nothing but non stop action, with a little bit of down time and some sprinkles of love thrown in.

However, while there was quite a bit that I enjoyed while reading, there was also some negative. I could see from point 1, where Ren was coming from when he fell for Kelsey. I mean she is the first person who has really seen the man dwelling within the tiger's skin. She cared for the tiger long before she even knew he was a gorgeous (aren't they all?) man. Even a gorgeous Prince. And she wanted only the very best for him. She wanted the tiger to be free, before she even knew she had to brake an ancient curse to free the man as well. It is obvious why he would fall in love with her. Yet throughout the ENTIRE book practically, once Kelsey finds out Ren is a man, she is hardly EVER comfortable around the man, but is completely comfortable around the tiger? Why is this. Well because the man is just sooooo gorgeous and good-looking, and rich, and a Prince for crying out loud. I mean he is just sooooo out of her league. She could never dare dream that he could ever be interested in a girl like her. GAH!!!!

Why is it that heroine's in a series rarely EVER have a sense of self-worth? Why is it that they all see themselves as ugly little trolls that no guy could ever possibly love? Through some of the book, Kelsey really really tries (you hear the sarcasm in my book) to look past the fact that she is SOOOO below Ren's league and tries to love him in return. I mean the guy comes straight out and told her that he loved her. But no she knows best, she's knows she's just not good enough for him and that he could have a supermodel (even though he may not even know what that is really), and that she's the first girl that has seen him in his human form for so long, that he just thinks he loves her. OMG!!!! people. Come on. Do you even hear yourself, Kelsey? You crying little wimp. Your not thinking about Ren at all right now, or how much your going to hurt him by so callously turning him away after you gave him the impression that you cared for him as well. Do you even care how much your about to hurt this guy, who has given you apart of himself that he has never shared with another girl for over 500 years? Am I the only one that sees this? Gah, it just annoyed me so much. And she just leaves him at the end of the book and breaks his heart likes it nothing. But she promises him that she'll still come back and help finish braking the rest of the curse whenever they need her. Oh yea, and break his heart even more by coming back why don't you.

However, the thing that annoys me even more then this love cycle, is the obvious fact that it was only done, so that Ms. Houck could put in a love triangle. Damn those UNNECESSARY love triangles that authors love to put into books. But while I can suffer through most love triangles, this one I already know is going to piss me the hell off. Because it's between two brothers.... That's soooo soooo soooo wrong of you Ms. Houck.

Besides, these few things that annoyed me, as well as feeling that the book was a little bit longer then what was really needed to tell the story, I enjoyed it. It was a great set up for the second book. A book in which I have a hunch the bad guy who started the curse is going to finally make an appearance. Finger's crossed that the next book in the series is even better.