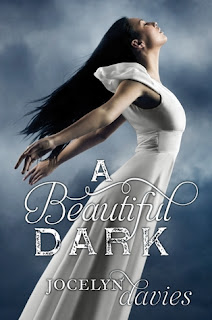 
On the night of Skye's seventeenth birthday, she meets two enigmatic strangers. Complete opposites - like fire and ice–-Asher is dark and wild, while Devin is fair and aloof. Their sudden appearance sends Skye's life into a tailspin. She has no idea what they want, or why they seem to follow her every move--only that their presence coincides with a flurry of strange events. Soon she begins to doubt not just the identity of the two boys, but also the truth about her own past.

In the dead of a bitingly cold Colorado winter, Skye finds herself coming to terms with the impossible secret that threatens to shatter her world. Torn between Asher - whom she can't help falling for, and Devin - whom she can't stay away from, the consequences of Skye's choice will reach further than the three of them could ever imagine.

Opening Sentence: The air had a brutal edge to it

To be completely honest with you all... I have no clue how to start out with this review. I went into this book, really wanting to love it. Despite the fact that I have scene both negative and positive reviews for this book, I still wanted to give it an honest shot at winning over my heart. Did A Beautiful Dark by Jocelyn Davies manage this feat? Eh... Not really.

Most of this book was just... okay. It had an okay plot line. An okay heroine. An okay setting (in which to be completely honest, reminded me WAY to much of Unearthly; angels, snow, ski trips... ringing any bells here?). But the farther I got along in this book, the more I felt I had to force myself to finish it. I wasn't really doing it for the pleasure of reading it any more.

A lot of this book felt forced and unhonest with itself. When a book is lying to itself, you know we have a problem. One of my biggest issues was with the love interests. I didn't feel the connection with either Asher or Devin. It really didn't feel like they were honestly falling (or even liking) in love with Skye. Both the connections (for me at least) felt fake. Like this book only had a love story to make it more interesting. And the love triangle, eck, don't even get me started on that. We all know now a days that most YA books have some kind of love triangle in them, and honestly, as long as the love triangle is necessary to the DEVELOPMENT of the story line, I don't mind it. However, this love triangle didn't benefit the book at all. Heck, none of the love (except for the secondary characters) benefited the book. It all just seemed... fake. Nora was so instantly drawn to Asher, even though he was cold to her a lot of the time. She even found him with another girl and then she had the audacity to get mad at him for it (she had already turned him away) and then she took him from said girl and couldn't understand why the girl eventually got mad at her.... *scratches my head* am I missing something here?

I eventually fell on Devin's side of this love triangle. Even after what he does at the end of the book, I felt his love for (oh wow, I almost called her Ember... that shows you how little an impression this book left on me that I can't remember the heroines name unless I look at the synopsis for the book) Skye to be a lot truer than Asher's. If I can call any of the love in this book true.

Besides the feeling of 3/4's of the book feeling forced, a lot of it was predictable. I could see who she really was. What really happened to her parent's. What Raven's (oh, how I hate that name for characters) true motives were. Which side each angel was on. Who Cassie (=[ my name was in this book... felt weird every time I read it, lol) was really in love with (but I have to say I probably would have fallen for that guy as well... lol). Blah blah blah blah and on....

I was just so completely uninspired by this book, so much. And may I mention that the more I looked at this book cover, the more I went from really liking it to really being annoyed by it.... Of course that could have been some of my annoyance with the story spilling out to encompass the book cover as well....

A Beautiful Dark was really only a 2 star read for me, but I am giving it 3 stars because of how it ended. It made me want to read the next book in the series to see what the heck happens. That and I want to see what happens with Devin. I think for once, I may have fallen for the guy who doesn't get the girl... So sad.

I have heard so much about this book and I've seen it around so many times! I've been wanting to read it, but I'm kinda in two minds about it. Anyways, really awesome review, Cassie!

Isn't it funny how the ending can often make the whole book better? (or worse). Too bad the love triangle wasn't good here. I agree with you - if a triangle helps the plot, I don't mind it.

"Okay" is actually the best word to describe this book. It wasn't so bad that I couldn't finish it, but it wasn't so good that I want to re-read it. Great review :)